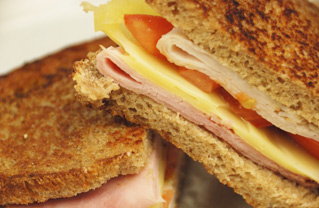 We've been enjoying sandwiches, like this ham and cheese, for quite some time.
Planet Green

Hard as it might to look past one’s own personal history with the sandwich—say, the paper-bag-lunch sandwich Mom always made or day-after-Thanksgiving turkey sandwiches we always scarfed down with Dad—the evolution of that humble food begins long before the modern era. In fact, common wisdom holds that the sandwich can be traced as far back as the first century B.C.E., when Rabbi Hillel the Elder took lamb and bitter herbs and, well, sandwiched them between two pieces of matzo. In simply interpreting a biblical mandate — “They shall eat the flesh that night, roasted on the first; with unleavened bread and bitter herbs they shall eat it” — Rabbi Hillel unknowingly invented the “Hillel sandwich” that has grown into one of the most important elements of the modern Passover Seder.

The Hillel sandwich was intended to remind whomever ate it about humanity’s pain and suffering; the bitter-herb mixture stands in for the “mortar” used by Jews to construct buildings for their Egyptian masters. Fun? Not so much. Nor do things get all that much better for many, many centuries: during the Middle Ages in Europe, stale pieces of bread, or “trenchers,” were smothered with meat and fed to beggars and dogs. The open-faced sandwich—today they’re called “tartines” by trendy restaurants and cafes—started out as nothing more than a table scrap.

That’s a pretty depressing start to a food revolution, but things start to look up from there. Sandwiches took on a more illustrious personality in the 16th and 17th centuries, when they made a few subtle, yet not unnoticed, cameos in literature. A 2004 article in food journal Gastronomica details a few specific instances: a 16th-century play here, George Peele’s 1595 play "The Old Wives Tale," a 17th-century work by prominent English playwright Thomas Heywood. All of these mentions don’t actually use the word “sandwich” but rather some variation on “bread and meat” or “bread and cheese.”

From there, the sandwich evolved into a food enjoyed by the English upper crust at members-only men’s clubs, but there exist a few conflicting reports about who really invented what we consider a sandwich today. It wasn’t until 1762 that the word “sandwich” would appear in print in English author Edward Gibbon’s first-hand account of a scene from The Cocoa Tree, a hip, high-society London gentlemen’s haunt that was popular with politicians at the time and “affords every evening a sight truly English,” Gibbon wrote. “Twenty or thirty, perhaps, of the first men in the kingdom, in point of fashion and fortune, supping at little tables covered with a napkin, in the middle of a coffee-room, upon a bit of cold meat, or a sandwich, and drinking a glass of punch.”

At the very same time Gibbon’s impressions were published, another sandwich was brewing at another London haunt: the Shakespeare Tavern, where men congregating for their “beefsteak club” get-togethers—exclusive, male-only dinners—noshed on the chef’s interpretation of a sandwich: beefsteaks, literally, cushioned between bread.

Others still trace the present-day sandwich to the mid-1700s, when British statesman John Montague, the fourth Earl of Sandwich (a title that actually refers to Sandwich, Kent, in southeast England, and not the subject of this article) routinely demanded his butlers serve him a piece of salt beef cushioned between two pieces of toasted bread. You know, so he didn’t have to get up from the card table—Montague was a notorious gambler. In turn, others around him began to order “the same as Sandwich!”

Enter 1840, when Philadelphia-born and English-bred cookbook author and etiquette expert Eliza Leslie published "Directions for Cookery." In doing so, “Miss Leslie,” as she was known, introduced the English-speaking world to the ham sandwich. She wrote: “Cut some thin slices of bread very neatly, having slightly buttered them; and, if you choose, spread on a very little mustard. Have ready some very thin slices of cold boiled ham, and lay one between two slices of bread. You may either roll them up, or lay them flat on the plates. They are used at supper or at luncheon.” Yes, even in those days the sandwich was noble enough for the dinner table.

Its Iowa inventor Otto Frederick Rohwedder, though, who played an integral part in our conception of this highly storied food. Considered “the father of sliced bread,” Rohwedder invented a machine that could both slice and wrap bread, expediting American bakeries’ production time and ensuring that their most basic product didn’t go stale. The Rohwedder Bread Slicer was first used by Missouri’s Chillicothe Baking Company in 1928. What’s Chillicothe’s official city slogan now? Yep, you guessed it: “the Greatest Thing Since Sliced Bread.” 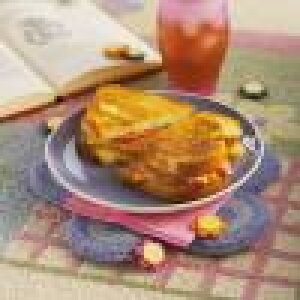 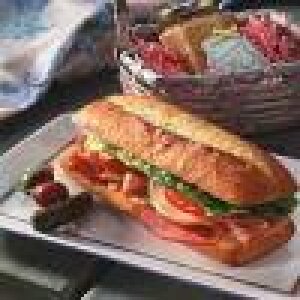 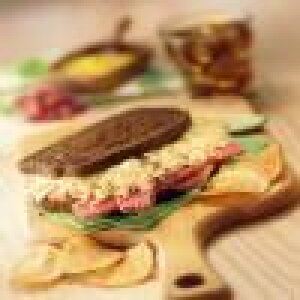