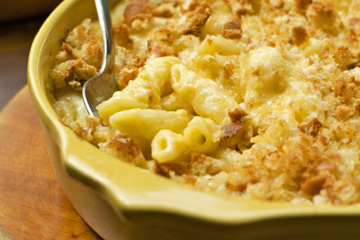 After the war-torn and financially difficult years of the 1930s and 40s, families of the 50s began to indulge in large, hot and comforting homemade meals. It was a time before fast food had taken hold and "low-carb" and "fat-free" were words the average homemaker acquainted with dinner. Meatloaf, tuna á la king and mashed potatoes with gravy were common dishes then, and modern chefs established the term "comfort food" to label what's become popular in restaurants now. A current trend for upscale restaurants is to eschew "fancy" courses in favor of signature versions of classic comfort dishes like meatloaf, casseroles, and one of the all-time favorite comfort foods, mac and cheese.

Some trace the history of mac and cheese all the way back to President Thomas Jefferson, who may or may not have created the dish. It was supposedly served by Jefferson in the White House in 1802, and we do know that the president returned from Paris with a macaroni mold. The first time a recipe appeared in print was in the cookbook "The Virginia Housewife" in 1824. The book was written by Mary Randolph, who happens to have been Jefferson's cousin. This lends some credibility to the legend that mac and cheese was in fact a creation of a sitting U.S. president. Kraft Foods made the dish an American classic in 1937 when it released the Kraft Dinner, the first boxed version of the dish.

Mary Randolph's recipe had three ingredients: macaroni, cheese and butter. Cooked macaroni was layered in butter and cheese and baked in a crispy 400-degree Fahrenheit (204-degree Celsius) oven. The current recipe for mac-n-cheese isn't too different in some circles, but some modern chefs have taken the comforting dish in new and exciting directions. It's important to distinguish that to actually be considered mac and cheese, you need to have at least the title ingredients. From there, the sky's the limit. There are all kinds of cheese to choose from, and a combination of cheeses is a great way to enhance flavor. Cheddar, colby and jack cheeses are all popular choices and can be mixed and matched. Adding a Gruyere, Romano or Pecorino is a great way to add some distinct flavor. Celebrity TV Chef Alton Brown includes ingredients like diced onion, egg, flour, mustard, paprika and bay leaf. Many recipes include a topper, like fresh-baked bread crumbs with parmesan for a crusty, golden finish.

Food guru Martha Stewart claims the best way to avoid stringy, curdled cheese is to first make a white sauce from butter, flour and milk before melting the cheese. It also matters what kind of cheese you use. The classic cheddar is the smoothest choice for a sharp white, while the yellow extra-sharp can become grainy. Italian elbow macaroni should be slightly undercooked, also called al dente, and then washed in water. This stops the cooking process and removes excess starch, which tends to produce a mealy texture once it's baked. Once you've layered all of your ingredients and added your topper, bake the dish at 375 degrees Fahrenheit (190.5 degrees Celsius) for about 25 minutes, or until it's golden brown.

American cheese, the popular cheese slice used on deli sandwiches, is actually a processed cheese made of colby or cheddar that's ground and bound together with water.