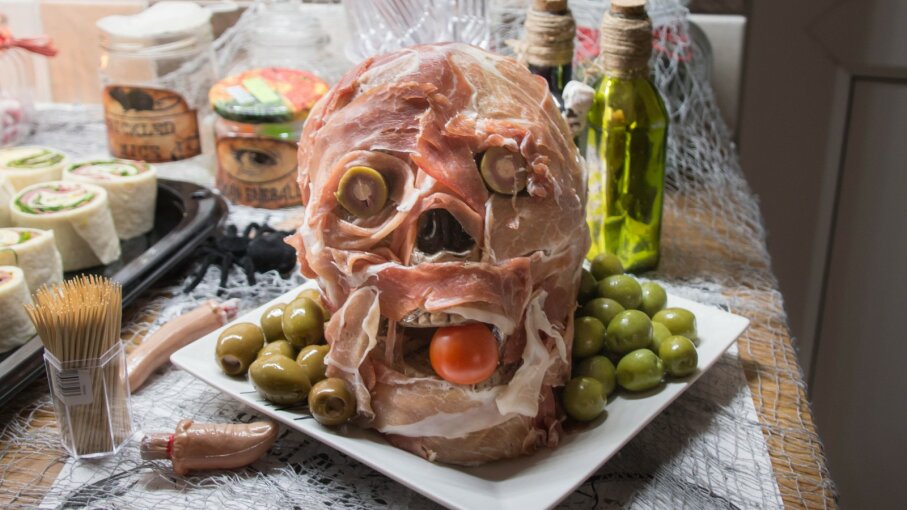 A skull made of food? Nice touch! Cuppyuppycake/Getty Images

When it comes to holidays, you can't beat Halloween for pure fun. Tricks, treats, mischief and costumes -- everything about it just screams for a party.

We're going to help you throw the creepiest, crawliest and most delicious party on the block. The following 10 recipes will gross you out, give you a fright and, in spite of that, tempt your taste buds. Best of all, you don't have to be a professional to make any of them. So grab your favorite monster and let's get started.

Everyone loves cupcakes. And with the popularity of the "Twilight" books and movies, vampires are pretty popular, as well. Here's how to give your cupcakes a whimsical "bite."

Prepare your favorite cupcake recipe. We suggest vanilla or white cake, as well as white frosting. Make them from a mix or from scratch, whichever you prefer. You'll also need a can of cherry pie filling. While the cupcakes bake, puree the cherry filling in your blender.

After the cupcakes are baked and completely cooled, take a paring knife and cut a small cone out of the center of each cupcake. Spoon the cherry filling into the cavity left in the cupcake. Then, slice off the tip of the cake cone and plug the hole in the cake. Frost as usual. When your guests bite into the cakes, the "blood" will come seeping out!

For added effect, use a toothpick to dribble a little more "blood" on the frosting, like a vampire bite.

Samhainophobia is the fear of Halloween.

Whip up some sugar cookie dough. From scratch or premade, whichever works for you. You'll also need red food coloring and about 3/4 of a cup of blanched whole almonds. It's important the almonds are blanched -- you'll see why in a minute.

Take heaping teaspoons of your chilled dough and roll them out into finger shapes. You can roll them with the palm of your hand. Firmly press an almond into one end to make a fingernail. Try using a paring knife to make small slices on your cookie fingers to resemble a knuckle.

Remember that sugar cookies tend to spread out while baking. You might want to experiment first, making the dough shapes a little smaller than the desired final size.

After the cookies are baked and cooled, brush some of the red food coloring onto the almond to make fancy painted fingernails. If you want to get extra gross, make toe-shaped cookies as well and paint the nails green.

If your Halloween party include a sit-down dinner, treat your guests to a meal that will give them the evil eye. Try out this "eyeball" soup recipe on your unsuspecting friends.

Tomato soup works best for this dish. The rich color looks a little like blood and will give the "eyes" a nice red surface on which to float. Here's what you'll need to make your eyes:

Serve the tomato soup in large shallow bowls. Float three or four eyeballs in there to keep an "eye" on your guests.

Here's a gory twist on the chips and dip party staple. Pretend the dip is monster brain, served from a monster skull.

The monster brains will be made out of guacamole. Guacamole is slimy, chunky and a yucky color, but so tasty. Prepare your own (there are tons of great recipes) or just pick some up at the grocery store.

Make the monster skull from a medium-sized squash or pumpkin. You won't have a problem finding a great variety this time of year. Slice off the top, and scoop out the insides until clean. Slice a small piece off the bottom of the squash as well, so it will stand up straight. Carve out a scary face, or use toothpicks with small veggies or candy to make funny faces (think Mr. Potato Head).

Fill up the skull with your guacamole brains and serve with chips. You can also make extra monster skulls, and fill them with salsa or sour cream.

This cake never fails to attract attention. Expect a crowd of people to gather around and say, "Ewwwww!"

Prepare your cakes according to directions. While they bake, make the pudding and chill. Smash the sandwich cookies to a litter-like consistency. Set aside a 1/4 cup. Add a little of the food coloring to the 1/4 cup.

Crumble your cooled cakes into a big bowl. Gently stir in the non-green cookie crumbs and the pudding. You may not need to use all the pudding -- just enough to moisten the cake mixture.

Line your litter box, and spoon the cake mixture into the box. Microwave your unwrapped Tootsie Rolls in small batches until they're pliable. Form them into -- well -- poop shapes. Bury most of them in the cake. Then sprinkle that last 1/4 cup of cookie crumbs on top of the cake. Add a couple more Tootsie Roll poops for effect. Stick the poop scoop and use it to serve "litter" to your grossed-out guests.

A great thing about cupcakes is that you can decorate them any way you like. There are many options for Halloween. Here's how to make cupcakes into creepy spiders.

We recommend going with all chocolate in order to mimic the dark color of a spider. But you can get creative and use any color cake or frosting you'd like. You'll also need chocolate frosting, chocolate sprinkles, black string licorice, some cinnamon candies and mini-marshmallows.

Start out by baking your cupcakes as usual. Use Halloween-themed liners for fun. Once the cakes are completely cooled, frost generously. Then dip the tops into the chocolate sprinkles to make the spider's body look fuzzy. Using scissors, cut eight 4-inch legs from the licorice. Stick the legs into the cupcake, four on each side. You can bend them in half so they look more realistic.

Cut the marshmallows in half and stick them on the cupcake to make eyes. Using a bit of frosting as glue, affix a cinnamon candy to each marshmallow.

You might think that once someone finds a dismembered hand in the punch, the party's over. But on Halloween, anything goes, and your guests will love their gruesome beverage discovery. You can use your favorite punch recipe for this one. We do suggest going with something light in color, with a ginger ale or lemonade base.

Make sure you have a large punch bowl, two new and clean latex gloves and some rubber bands. Mix a bit of green food coloring into about three cups of water. Fill up each glove (about 1 1/2 cups per glove) and seal the wrists tightly with the rubber bands.

Place the gloves carefully on a cookie sheet covered in parchment paper. Put the sheet in the freezer overnight, and take it out only when you're ready to serve the punch. Remove the gloves. Float the frozen hands in the punch bowl. They'll keep the punch cold and make your guests wonder what else might be lurking underwater.

The origins of Halloween date back more than 2,000 years to an ancient Celtic festival.

Can you think of anything more disgusting than roaches? Just the sight of one sends people scurrying. See how brave your friends really are when you serve them these stuffed "cockroaches."

You only need three ingredients:

Mix the cream cheese and walnuts in a small bowl until well combined. The walnuts provide a creepy crunch that mimics the insect's body. However, if your guests have allergy issues, you can skip the walnuts.

Split the dates open just a little bit and gently fill with the cream cheese mixture. The dates really look like roaches! To heighten the effect, place some plastic cockroaches around the serving plate.

Devilled eggs are a popular party food. Give your devilled eggs the Halloween treatment by turning them into devilled "eyeballs."

Cut your boiled in eggs in half, lengthwise. Scoop the yolks into a bowl and set the whites aside. Mash the yolks with a fork, and mix in the mayo, onion powder mustard and salt. Use enough mayo to get a smooth paste.

Place about a teaspoon of the yolk mixture into each egg white. Then, place an olive half in the center of the yolk so it looks like an eyeball.

For a finishing touch, dip a toothpick in red food coloring. Draw bloodshot veins onto each eyeball.

The Irish originally used turnips for their jack o' lanterns.

This disgusting dude will make a perfect centerpiece for a gruesome Halloween buffet. First, you'll need to pick up a plastic skull. The closer it is to life-sized, the better.

First, ensure your plastic skull is clean and dry. Spread whatever sauce you've chosen all over it. It will give the skull a bloody look as your guests lift away the meat.

Place the meat all over the skull, molding it with your clean hands. Tear up the pieces to make them fit better. Remember to leave openings at the eyes and mouth. Use extra sauce to get it to stick, if necessary. Make sure the entire skull is covered. If necessary, use a few toothpicks to keep the meat in place.

Next, stuff the cocktail onions into the eye sockets of the skull. Slice the ends off the black olive and place one on each onion to finish off the eyes.

Wrap loosely with plastic and refrigerate until you're ready to serve. Don't be afraid to get creative -- you can also use mozzarella balls or radishes for the eyes. Serve your meathead on a platter with a bed of lettuce and some bread or crackers. 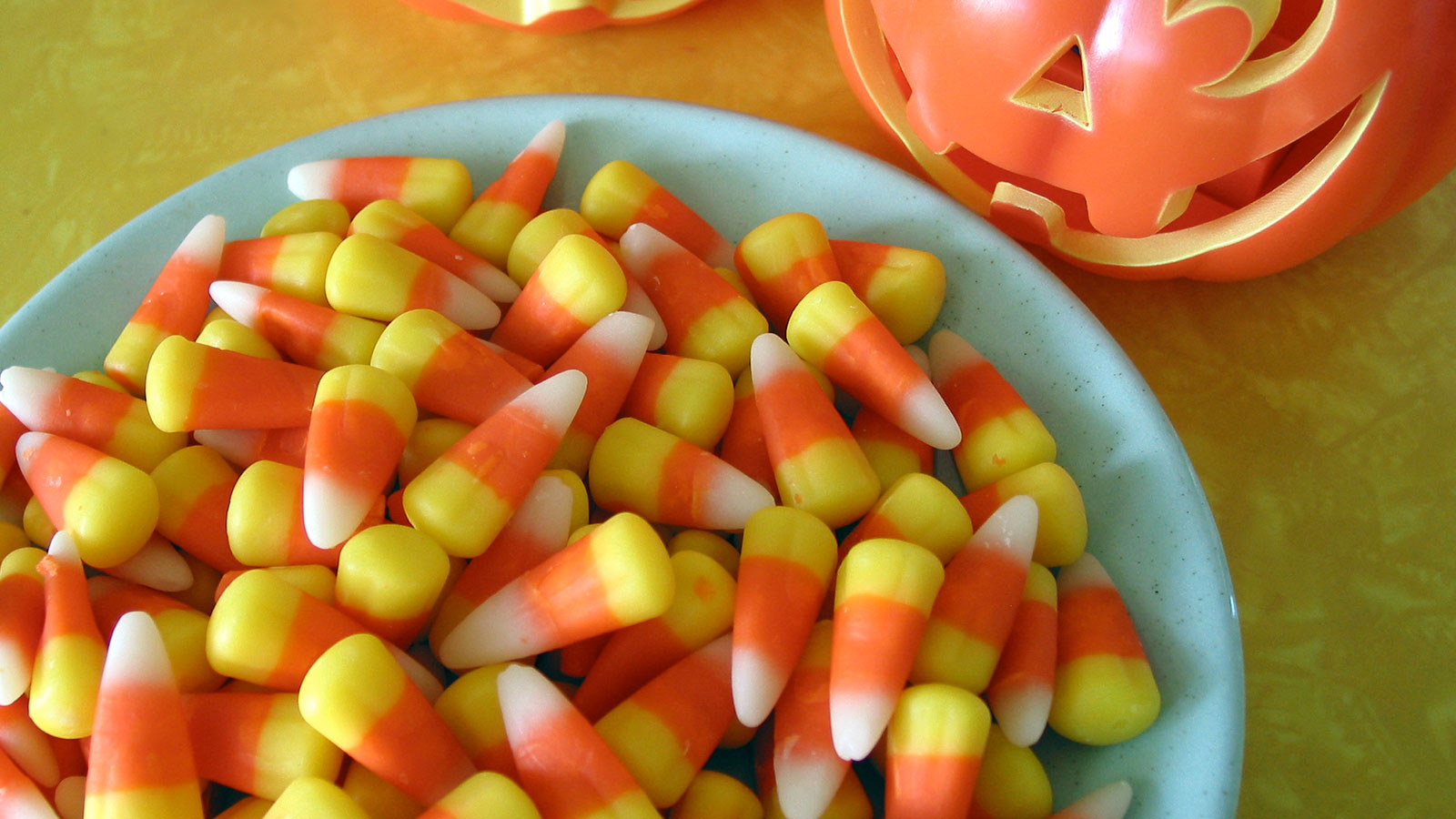