by Alia Hoyt
Prev NEXT
10 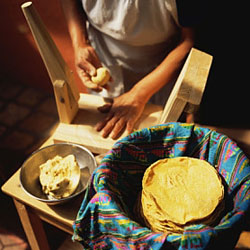 Corn tortillas are a primary component of many Mexican dishes, from enchiladas to tacos. Of course, the store-bought variety is easy to find and fairly inexpensive, but enterprising chefs can make authentic tortillas from scratch! You won't even need to purchase actual ears of corn from the store. Rather, the main ingredient is masa harina -- a type of flour made from dried masa -- which is created from corn that has been specially treated. In fact, in its dried incarnation, corn is considered a grain, not a veggie.

Although masa harina sounds exotic, it can be purchased in most grocery stores. When making corn tortillas, the only other necessary ingredient is water. Of course, a tortilla press would be a good investment if you plan to make them on a regular basis, though a skillet or griddle will also work.