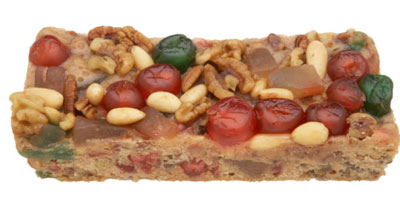 On average, a fruitcake weighs up to two pounds and contains dried or candied fruits as well as alcohol like rum. See more pictures of holiday baked goods.
Thomas Northcut/Getty Images

Each year in December, the U.S. Postal Service places tidy, dense packages of certain baked goods into the mailboxes of citizens. But this parcel isn't relegated to the United States. In fact, in 2006, some 2,952 pounds of fruitcake -- a traditional Christmas treat -- were delivered to Iraq [source: Christian Science Monitor]. And with a shelf life of up to three years (even longer if generously doused with rum), it's easy to see why they're so mail-friendly. But what, exactly, is fruitcake?

Although there are many recipes, the main ingredients that constitute a proper fruitcake are flour, s­ugar, eggs, whiskey, brandy or rum, walnuts and nuts or dates. But it's the signature element -- fruit -- that merits mention. Some recipes call for candied fruit, as opposed to dried fruit. And the type of fruit tends to vary by region.

Fruitcake is a tradition that goes back to Roman times. It became a staple of festivals, and today is widely associated with the December holidays. There are some who are ardent about these fruit-filled loaves. And while fruitcake may not have a poem penned for it like another traditional food, haggis ("To a Haggis," by Robert Burns), it has been defended by many and continues to be baked, wrapped and delivered. In fact, Texas-based Collin Street Bakery, which has been providing fruitcakes since 1896, produces more than 1 million a year and ships to 200 countries [source: Texas Monthly].

Others are less than thrilled to receive what they see as heavy and inedible as a brick. After all, according to Harper's Index, the average fruitcake has a 1:1  density ratio with mahogany [source: Christian Science Monitor]. So why is fruitcake sought after by some and ridiculed by others?

In this article, we'll look at the history behind this fruit-studded loaf and we'll learn what makes it so weighty and impervious to molding, as well as how to "feed" your fruitcake. We'll also explore alternative uses for fruitcake, such as paperweight, doorstop or even projectile.

In 1969, astronauts aboard Apollo 11 ate two meals. While the first meal consisted of bacon, sugar cookie cubes, coffee and a pineapple-grapefruit drink, the humble fruitcake starred in meal two, alongside beef stew and cream of chicken soup [source: NASA].