How to Create a 1930s Dinner Party Menu 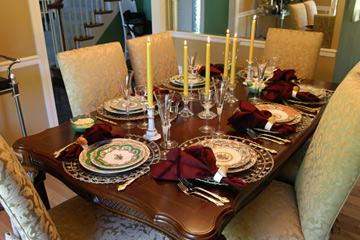 A vintage tablescape will make your '30s party the real deal!
iStockphoto/Thinkstock

The U.S. stock market crash of 1929 greatly affected the landscape of entertaining for the decade of the 1930s. Families who were able to afford a maid or housekeeper a few years earlier were forced to scale back. The recipe books of the period helped hostesses do more with less by offering up classy and refined dishes that were still relatively inexpensive and easy to put together. That's a challenge in any decade, but at a time when a host's serving pieces may have been courtesy of a Depression glass promotion put on by the local gas station, having friends over for a shindig could be a curious mix of the chic and sensible.

Remember, too, this was way before fat became a dirty word and people learned to fear carbs. You can probably put together a respectable 1930s menu by just bathing everything in butter or cream. Keep the nutritional information to yourself, and you have a sure winner.

Using foods in season was an important menu consideration in the 1930s, too. The Global food economy didn't exist then, so if you wanted peaches for cobbler, your dinner party had better be in June or July or you'd be eating your canned bounty from last season. Being able to add fresh cherries to a gelatin mold or make a dessert using tropical fruits like bananas or fresh pineapple were considered indulgences, too. If you lived in California, you might have offered guests a sliced avocado appetizer. If you were living in Kansas, though, you likely only knew "alligator pears" from magazines. If an avocado did make it to your local market, it would have cost a big chunk of you meal budget. The same goes for other regional delicacies like asparagus, soft-shelled crab and crawfish. Depression-era soup kitchens were common in large cities, but you don't have to limit your 1930s dinner party menu to thin broth and fried potatoes. Many areas around the country were lucky enough to be surrounded by family farms where reasonably priced ingredients were relatively abundant for sale or barter.

With sketchy phone service, no television and no Internet, parties in the 1930s were the big entertainment venues of the day. People partied like they meant it. Guests came to eat, catch up on the local gossip and forget their troubles. This was a time when people were listening to the radio for the latest news and yearning for the lavish lifestyles of their favorite movie idols. Daring mobsters were making big headlines with their turf wars and their supply of Prohibition bathtub gin. Haunting blues music and moody jazz by legends like Duke Ellington and Billie Holiday and big band favorites like Benny Goodman and Tommy Dorsey helped define the distinctive sounds of the era.

Whether you want an elegant, small gathering or a large, raucous brawl, you can find 1930s recipes and fun ideas to fit the bill. On the next page, we'll investigate a few foods your granny (or her mom) may have considered just the thing for a special soiree.