by Alia Hoyt Dec 7, 2018
Restaurants have gotten much louder in the past two decades. Thomas Barwick/Getty Images

Has the volume in a restaurant ever made you finish your meal early? If so, you're not alone. Restaurants manipulate diners in any number of ways to influence food choices and consumption, from lighting to menu to server presentation. Unfortunately for those headache-prone restaurant goers, some places also choose to crank up the tunes and the background noise.

Chef Mario Batali is often blamed for the phenomenon of ultra-loud eateries in the 1990s, when he decided it would be a good idea to flood the dining room with the same loud tunes he was playing in his kitchen. (Batali has since been accused of sexual harassment and inappropriate touching from several of his female employees, and his restaurant group severed ties with him in May 2018.) Other chefs followed suit and suddenly it became very hard to hold a conversation with the person sitting directly opposite you at a table. Some restaurateurs felt a "livelier" atmosphere encouraged more patrons, but a side "benefit" was quicker table turnover, thus maximizing the number of people who could dine in a given evening.

Diners aren't necessarily eating more quickly to get out of a restaurant, however. It's actually an unconscious response to the noisy stimuli. An often-referenced 1985 small study out of Fairfield University looked at how chewing intensity/speed varied according to the type of music being played. Unwitting participants chewed their food at varying times of day, to slow-tempo, fast-tempo or no music at all. Although the volume level was kept the same for both musical situations, it's important to note that fast-tempo music often gives the impression of being louder than slower music.

"A significant increase in the number of bites per minute was found; the effect was largest for fast-tempo music, which suggests arousal as a possible mediator," the researchers wrote in the study. So, the faster, louder music gets people to down their food more quickly, relieving the table for future customers.

There are plenty of opinions about whether or not this is a sound practice. "A restaurant that places profit above dining experience often plays loud music with a fast tempo that subconsciously puts diners under pressure to eat more quickly, even if that means that they are less able to enjoy their meal," writes Dr. Neel Burton in Psychology Today, adding that this might actually work against them in terms of physiology. "Appetite is in part a function of the parasympathetic nervous system. Loud, fast music activates the sympathetic nervous system (the 'fight-or-flight' response), which opposes the parasympathetic system and thereby diminishes appetite. That, in a nutshell, is why you don't suddenly feel a tinge of hunger while being chased up a tree by a lion."

Of course, once the meal has already been ordered and will have to be paid for, the imminent risk is minimal for restaurants (unless they really rely on desserts as a money-maker). The future problem, however, could be far greater, as some would-be repeat diners will shy away for fear of another ultra-loud meal. The non-profit group Action on Hearing Loss found in a 2016 survey of nearly 1,500 people that 91 percent of those who perceive a restaurant as too noisy would opt not to return, with 79 percent admitting to leaving a restaurant early because of excessive noise levels.

Some of the noise can be blamed on a fairly recent shift toward minimalist, urban restaurant décor, such as concrete, tile or wood flooring instead of sound-absorbent carpet. High ceilings with exposed beams are also all the rage, but cause all the echo, as well. The complaints aren't all frivolous, either. Regular exposure to decibel levels over 85, such as those emitted by a lawnmower, heavy traffic or — ta da — a noisy restaurant, can do damage to hearing over time (for comparison, normal conversation with background music clocks in at 60 or so decibels). So, if you fear for your ears, steer clear of establishments that make it difficult to hold a regular conversation or leave your ears ringing after the fact.

Now That's Cool
Sick of shouting over your soup and salad? Check out the app Soundprint, which allows users to find quiet spots to eat, plus they can also rate and submit the sound level. The iHEARu app is a similar concept, which also offers insight into the noise levels of other types of locations, like theaters and bars.

Battle of the Best Sonar: 'Team Dolphin' vs. 'Team Bat'

How Can You Tell if a Chicken Egg Is Fertilized? 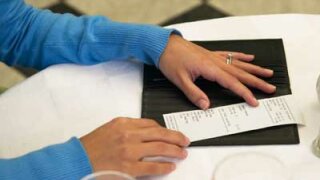 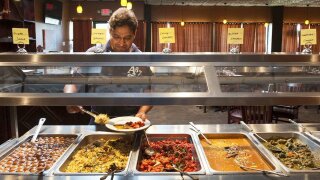 Should Restaurants Charge a Penalty Fee for Uneaten Food? 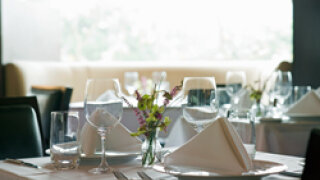