How does popcorn work? 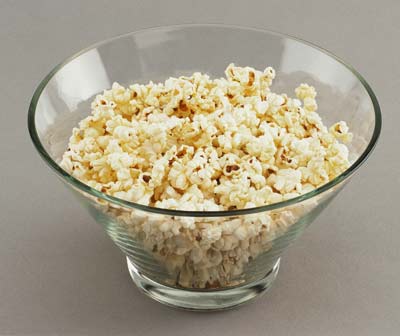 Foods Under $5 Image Gallery When a popcorn kernel heats up, the moisture inside the kernel expands. See more pictures of foods under $5.
Photodisc/Getty Images

Popcorn certainly is unique. You toss a flat pouch no larger than a wallet into a microwave oven and in three minutes, it has expanded to a volume 40 or 50 times its original size. Not too many other foods act this way.

There are three elements that make popcorn work like this:

The strange part is the white solid that forms during the process. According to this article:

The gelatinized starch granules do not explode, but expand into thin, jelly-like bubbles. Neighboring bubbles fuse together and solidify, forming a three-dimensional network much like a sink full of soapsuds. This is the white fluffy solid we eat.

There are two things from regular life that behave something like this. The first is bread or muffins, which expand and solidify (although much more slowly). The other is "silly string," which is a liquid that solidifies as soon as it hits air.

Here are three experiments you can perform to get a better understanding of how popcorn works: