Where did the potato chip come from? 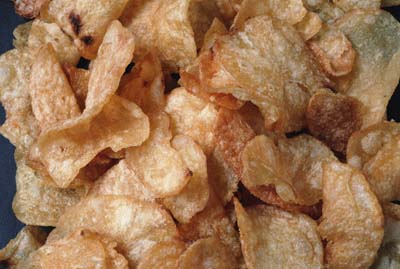 Fried potatoes were first introduced in the United States by Thomas Jefferson in the late 18th century. Jefferson had come across them while he was in Paris. The actual French fry is an American invention but received its name based on the origin country of fried potatoes.

During the early 19th century, fried potatoes steadily gained in popularity. They became a common menu item at restaurants across the country. In 1853, a diner at Moon's Lake House in Saratoga Springs, N.Y., ordered the fried potatoes with his meal. The diner, rumored to have been Cornelius Vanderbilt, sent the potatoes back to the kitchen with a complaint that they were not crispy enough. The chef at the restaurant, George Crum, apparently was furious with the criticism. So he sliced the potatoes paper-thin, salted them heavily and refried them. Ironically, instead of ruining the meal for the diner, Crum's creation was a hit with the patron.

The owner of Moon's Lake House, realizing that the chips were delicious, made them a menu item. Eventually, Crum opened his own restaurant that featured the thin, fried potatoes. He called them Saratoga Chips. As word of the chips got out, other restaurants began to serve them. It wasn't long before potato chips were a staple at restaurants across the country.

William Tappendon of Cleveland, Ohio, is credited with taking the potato chip out of the restaurant and into the grocery store. In 1895, he began selling potato chips to local grocers and turned his barn into the world's first potato chip factory. During the early 1900s, several companies built large factories for the mass production of potato chips. And the 1920s saw the birth of three companies that define the potato chip industry:

Today, potato chips are America's favorite snack food and come in an amazing number of varieties. Modern factories mass produce the chips using continuous fryers or flash frying. Some chips are made from reconstituted potato flakes instead of raw potato slices. You can learn more about the history of the potato chip and how the chips are made by visiting the sites below.