Everything You Ever Wanted to Know About the Slow Food Movement 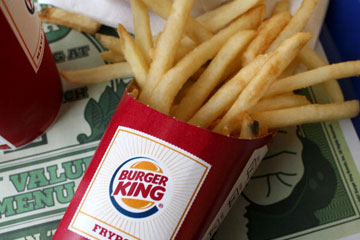 Fast Food Image Gallery The Slow Food movement would frown on your eating BK while you vacation in a different country. See more pictures of fast food.
Justin Sullivan/Getty Images

In 1986, the fast-food chain McDonald's opened a restaurant near the historic Piazza de Spagna in Rome. Brandishing bowls of fresh penne pasta, culinary expert Carlo Petrini led a group protest against the globalization of fast food. Soon after, he began an organization called Arcigola, the forerunner of Slow Food. Arcigola's mission was to protect the interests of small-scale food producers and promote the pleasure and taste of good food and wine.

The philosophy of Slow Food is "good, clean and fair food." This means:

Slow Food is the antithesis of fast food. Proponents of the slow food movement believe food should be grown and bought locally, prepared with care and consumed with appreciation. In a world where we can get cheap, processed food and gobble it down without even leaving our cars, Slow Food seems like a throwback to a different era.

The Slow Food movement aims to preserve biodiversity. Petrini and others believe that the globalization and industrialization of food has resulted in standardizing taste and is destroying many food flavors and varieties. Fast food always tastes the same, no matter where you buy it. Would you travel all the way to Italy to eat at Burger King? If you did, Slow Food activists would insist you're missing out on local, seasonal food as well as disrespecting the area's culinary traditions.

Another priority of the Slow Food movement is furthering the relationship between what they call food "producers" and "co-producers." Changing the name from "consumer" to "co-producer" links the farmer and the buyer, and makes a passive role more active. Co-producers are encouraged to get to know and support their local farmers, cheese makers, winemakers -- anyone who provides them with their locally grown cuisine. Slow Food also works with other organizations to establish seed banks, ensuring the thousands of varieties of plants around the world won't die out due to globalization, disease or disaster.

Another important facet of the Slow Food movement is taste education. If you understand all facets of your food and where it came from, presumably it's more pleasurable and meaningful when you consume it. Taste education helps people care more deeply about where their food comes from. Slow Food International holds workshops and events in taste education. These events take place in farmers markets, wineries and apple orchards. In schools, taste education happens in the form of school gardens, improved school lunches and curricula.

No activist movement is without controversy, of course. Critics call the Slow Food movement elitist, pointing out that not everyone can afford to buy organic, locally grown food. They say that slow food cannot economically feed our global population. Industrialized farming yields much more per acre than organic farming, meaning that Slow Food could potentially lead to deforestation, as we would need more farmland to produce more food.

Slow Food proponents fight the "elitist" tag by pointing out that we simply need to reprioritize our feelings about food -- putting healthy nourishment above fancy houses or expensive clothing on our list of physical needs.

If Carlo Petrini was the father of Slow Food, Alice Waters is its modern mother. The noted chef works tirelessly to promote the Slow Food movement. She's written several books and applies the Slow Food philosophy in her California restaurant. She also created the Edible Schoolyard, teaching schoolchildren how to grow and appreciate food.