How to Make Pastry Dough

During the Middle Ages, pastry was plain and utilitarian. Europeans shaped it by hand into cooking containers that did double duty as storage for meat dishes. After crafting a pan made of dough and filling it with meat and seasonings, the cook rolled out a dough "lid" and sealed it around the edges. Cooking the meat inside the dough container stabilized it by killing microbes that break it down, and the thick, sturdy pastry enclosure protected the meat from airborne contaminants.

Mix the flour and salt together in a large mixing bowl, then form a well in the center. In a saucepan, combine lard and liquids and heat until just boiling. Remove the pot from the heat and pour the liquid into the flour well, stirring the mixture quickly with a wooden spoon until the dough forms. Allow the dough to rest until it cools, then turn it onto a lightly floured board and knead until it's smooth. You can hand raise the dough into a cooking vessel, or shape it by molding it around the outside of a pot, pie pan or jelly jar, depending on what size you need. Be sure to save some dough to flatten into a lid for your dish [source: Floyd, Green Chronicle, McGee]. 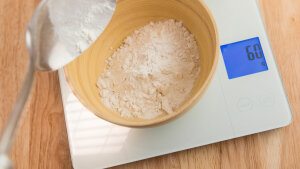 Why Professional Bakers Never Measure With Cups, Only Scales