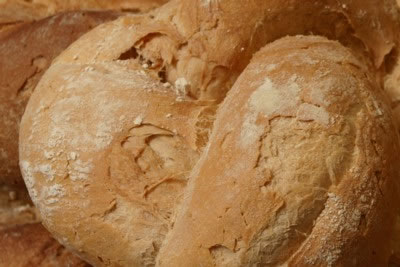 Q. I've come across several recipes that call for masa harina, and I've seen it in the supermarket in the baking aisle with the flour. What is masa harina?

A. Masa harina is the traditional flour used to make tortillas, tamales, and other Mexican dishes. Literally translated from Spanish, it means "dough flour," because the flour is made from dried masa, a dough from specially treated corn.

To make masa harina, field corn (or maize) is dried and then treated in a solution of lime and water, also called slaked lime. This loosens the hulls from the kernels and softens the corn. In addition, the lime reacts with the corn so that the nutrient niacin can be assimilated by the digestive tract.

The soaked maize is then washed, and the wet corn is ground into a dough, called masa. It is this fresh masa, when dried and powdered, that becomes masa harina. (Add water once again to make dough for tortillas or tamales.)

Fresh masa is available in Mexican markets, refrigerated and sold by the pound. But masa harina is a fine substitute. Availability and your personal taste determine whether you start with fresh or dried masa.

Do not substitute corn meal or regular corn flour, however; they're produced from different types of corn and are processed differently. They will not produce the same results. Regular wheat flour also cannot be substituted.

To learn more about masa harina and Mexican cuisine, see:

Who Put the Baby in the King Cake?
Ultimate Guide to the Northland Wine Region
How to Stew Tomatoes