Why does kale make you gassy? 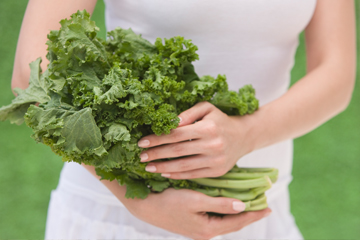 Kale has become the little black dress of the culinary world: chic, understated and perfect for nearly every occasion. It makes sense then, that after seeing kale crop up on menus and cooking shows, I succumbed to the trend. Order kale chips? Absolutely. Juice a few leaves of the dark green vegetable into my morning smoothie? Of course. Add some kale to my evening stir fry? You bet. Avoid all known associates until this bout of noxious gas passes? Unfortunately, yes.

This member of the cabbage family is a cousin to broccoli, cauliflower and collard greens. It's considered a "superfood" because of its high nutritional content, particularly when it comes to antioxidants, including beta-carotene, vitamin C and vitamin E. While cooking kale diminishes its nutritional punch, one cup of raw kale has 3 grams of protein and 2.5 grams of fiber, and also includes folate and vitamins A and K. It also contains an omega-3 fatty acid and minerals such as potassium, calcium and zinc [source: Tweed].

Kale may be great for boosting one's health, but it does come with a price — it can be pretty hard on your digestive tract. So why does kale make people gassy? In general, anything too difficult to digest will cause gas. A single cup of raw kale, which is healthful in many ways, contains nearly 15 percent of the daily fiber intake for an adult. Most of this fiber is of the insoluble variety, which poses a challenge for the army of bacteria in your large intestine, which attack undigested food. If the attack doesn't work, the troops will often forgo the battle to let the food pass through to its final destination. The undigested food can ferment in the colon, which causes lower abdominal discomfort and gassiness. Kale also contains raffinose, an indigestible complex sugar that can cause excessive gas.

One report, which analyzed more than five dozen studies on the gastrointestinal effects of low-digestible carbohydrates — including fiber — found that consumption leads to excessive gas, especially when eaten in large amounts. And guess what one of the top gas-producing foods just happens to be? Kale [source: Grabitske].