Fried chicken might have been perefected in the U.S. but it's popular all over the world. Brian Yarvin/Getty Images

Who doesn't like a piece of chicken, battered and deep-fried in some hot oil until it's crispy on the outside but still nice and juicy on the inside? Yum. This method of frying chicken was perfected in the U.S. but not without a lot of influence from other countries — and even some controversies along the way. Here are five delicious facts about fried chicken.

1. Credit the Scots — Or the Ancient Egyptians

Although neither group is likely come to mind as the innovators of fried chicken, historians believe they both had a hand in it. Between 7,500 to 5,000 B.C.E., wild fowl were domesticated in Southeast Asia and stewed chicken appeared in accounts of that period from China, West Africa and the Middle East. From the Middle East, the chicken made its way to ancient Egypt where its image adorned Pharaohs' tombs and its meat fed the slaves building the pyramids.

From Egypt, chicken spread its wings to Greece, the rest of the Mediterranean and then on to the British Isles. The type of fried chicken favored in the U.S. may have been imported by Scottish settlers to America, whose citizens favored pan-frying chicken as opposed to boiling or roasting it the way the English did.

However, as an Atlantic article put it, "While we can no longer be sure whether it was African slaves or Southerners of European descent who first decided to bread and fry these stringy yardbirds, we do know that West Africans have a tradition of frying food in hot oil, and that fried chicken as we know it today originated in the South."

2. The American South Perfected It

The first recipe for fried chicken in the U.S. appeared in a book called "The Virginia Housewife, Or Methodical Cook" published in 1825. This was written by Mary Randolph, who ran a boarding house, and whose brother was married to Thomas Jefferson's daughter. In fact, Randolph's book is considered by many to be the first cookbook ever published in America, and the inclusion of a fried chicken recipe says something about the dish's place in the culinary landscape of the country. Her recipe would be familiar to cooks today and involves dredging a cut-up bird in flour, sprinkling it with some salt and deep-frying the pieces in lard.

Before World War II, fried chicken was a special occasion dish because the meat was not that cheap and it was laborious to cook. After butchering the chicken and singing out the feathers, you had to cut up the chicken and stand over the stove as you fried it. The dish wasn't often seen in restaurants either.

3. Segregation Helped it to Flourish

Slave codes in the South forbade enslaved people from owning hogs or cattle but allowed them chickens, as those animals were considered too insignificant to ban. That, coupled with the fact that the bird was tasty, made it a favorite for slaves — as well as the plantation masters for whom they cooked.

But unfortunately, eating fried chicken became associated with ugly racial stereotypes. In the 19th century one writer noted, that "were the negro to be cut off from chickens he would probably pine and die." A scene in the 1915 racist film "Birth of a Nation" showed the "dangers" of having black elected officials by portraying them acting rowdy and greedily eating fried chicken.

However, fried chicken also provided a way of improving one's lot. During and after the Civil War, African-American women in Gordonsville, Virginia often sold fried chicken and other foods to passengers on trains as a way of earning money. In fact Gordonsville became known as the "Fried Chicken Capital of the World."

Jim Crow laws in the South prevented African-Americans from eating in most restaurants before the 1960s. So they often carried fried chicken in a shoeboxes lined with waxed paper when traveling. Fried chicken didn't need refrigeration so it was good to carry on a long trip whether by train or car.

4. Colonel Sanders Was No Overnight Success

Harland Sanders had done time as a tire salesman, gas station owner and soldier (the "Colonel" was an honorary title from the Kentucky governor in 1936), among many other jobs, before he came up with a genius method for cooking fried chicken quickly. This involved using a pressure cooker and a secret blend of seasonings. He sold the dish at a restaurant he opened in Corbin, Kentucky — but it didn't catch on.

However, he did have success selling the recipe to another restaurant and that gave Sanders an idea. At age 65, he hit the road selling his fried chicken recipe and the right to use the name "Kentucky Fried Chicken" to businesses in exchange for a 5 cent royalty on every chicken sold. He adopted the white suit as part of his Kentucky colonel shtick. By 1964, when he sold his company, there were 600 franchises.

Today, KFC is one of the best-known fast food brands worldwide, with more than 18,000 franchises in 115 countries. In Japan for instance, a bucket of KFC is a mandatory part of Christmas celebrations.

5. Fried Chicken Is a Global Thing

"The U.S. continues to welcome immigrants from heavy fried chicken-eating countries in the Caribbean, the Middle East, and West Africa," wrote food historian Adrian Miller. "Fried chicken is a perfect playground for food entrepreneurs because of its versatility, which creates an open invitation for re-invention. We all should be salivating in anticipation."

You've probably heard that putdown to describe sometime who's not as young as he appears to be. The phrase comes from the early 1700s when chickens born in the spring got better prices than those who had been through the winter. Spring chickens were preferred for frying too, as they were more tender. If a buyer got an older bird in disguise he would complain that it was "no spring chicken."

What does soaking chicken in buttermilk do?

Soaking chicken in buttermilk makes the meat tender. The buttermilk helps the chicken stay juicy while tenderizing the meat, breaking down the tougher parts and pieces.

What is chicken fried chicken?

What is the secret to crispy fried chicken?

A steady oil temperature is key to extra-crispy fried chicken. You want to keep the oil consistent so all of your chicken cooks properly and crisps up as expected. Some people also add a little cornstarch when breaded and battering.

Can you use milk instead of buttermilk for fried chicken?

You can use milk as a quick substitute for fried chicken -- all you have to do is add a little lemon juice to the milk. The lemon will turn your milk into something close to buttermilk.

Do you flour chicken before frying?

Yes, you need to dredge your chicken in flour before frying it. Flour is what gives fried chicken its brown crust.
​ 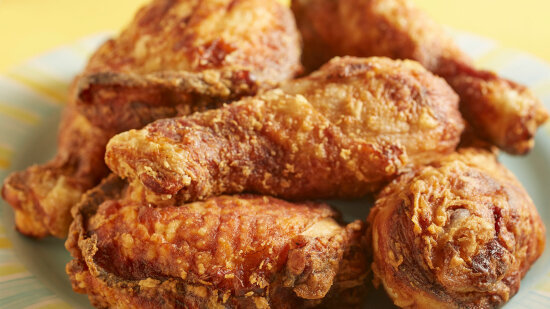 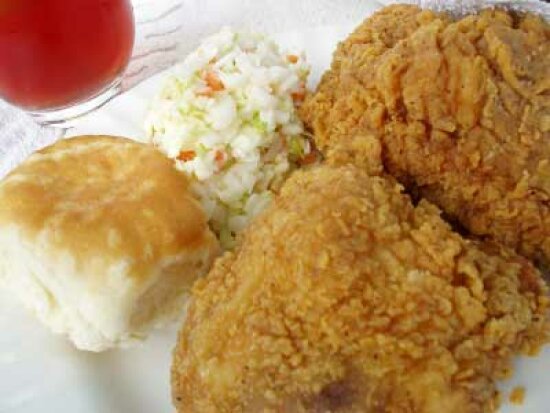 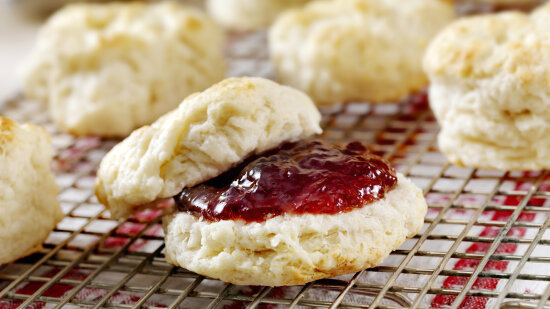