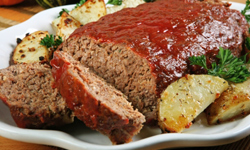 Meatloaf has been around what seems like forever. Maybe it's time to mix it up a bit. See more pictures of comfort foods.
©iStockphoto.com/adlifemarketing

Meatloaf has been a popular family menu staple in U.S. households for many years. It found its way onto dining room tables around the turn of the 20th century, when meat was expensive and frugal matriarchs everywhere were trying to feed their families while cleverly stretching their resources. Traditional meatloaf recipes combine ground beef with breadcrumbs, though veal was used in earlier recipes because at the time, it was less expensive than beef [source: Jacobi]. Some of the most popular recipes in the early days were distributed by Quaker Oats, who recommended using their oats in lieu of bread crumbs. Here are five recipes guaranteed to funk up meatloaf night at your house.