Does a Beer's 'Born-on Date' Matter? 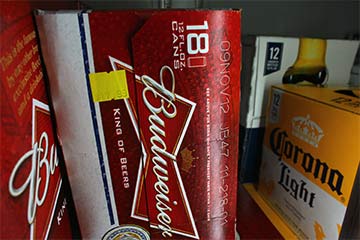 Budweiser proudly displays its 'born-on' date, as seen on this case of beer.
Joe Raedle/Getty Images

Happy birthday, beer! The next time you pick up a cold one, check the bottle or can for a "born-on date." This handy set of numbers will tell you the date your beer was brewed. While you may not be curious about your beverage's birth for sentimental reasons, paying attention can definitely be good for your tastebuds.

As most commercial beer ages, its flavor begins to deteriorate. Oxygen trapped in the can or bottle will begin to flatten the fizz. And the taste? Once so mellow, it will start to take on a sharp sulfur edge (and, unfortunately, assault your nostrils with a skunk-like stench).

Miss this "drinking window" and you'll be left with a stale imposter. The exception to this "old beer = bad beer" rule is beer that has a high alcohol content (usually more than 9 percent) that has been brewed specifically for aging; this beer usually contains remnants of fermenting yeast and is known as "living beer." If properly stored in a cool, dark place, it can be aged up to five years [source: The Kitchn].

However, most beer doesn't get better with age. On average, most commercial beer will have a shelf life of about six weeks from the time it is packaged. You can elongate a beer's lifespan by storing it out of sunlight and keeping it between 55 and 60 degrees F (13 and 16 degrees C). In fact, some commercial beers from large breweries can be refrigerated up to a year -- as long as they are kept away from direct sunlight, which can break down flavors. At room temperature, commercial beer will keep about six months. Beer from microbreweries has a much shorter shelf life, so buy it on an as-needed basis [source: Professor's House].

Don't see a born-on date? It's there, but it may not be easy to spot. In order to alert distributors when beer is too old to be sold, brewers devised a code comprised of letters and numbers. The code lets distributors know when the beer was brewed, and where. It begins with a single letter, A through M, to correspond with each month of the year. "A" is for January and so on, with this exception: "I" is skipped entirely and "J" is for September. Next, you'll see two numerals, which refer to the day of the month, followed by two numbers that correspond with the last two digits of the year. Finally, two letters appear: The abbreviation of the state in which the beer was brewed. For example, A0414KS would mean a beer was brewed Jan. 4, 2014, in Kansas. To complicate matters, not all brewers use the same secret code. Some use three character codes and others use four character codes that aren't as easily deciphered [source: Knecht].

There are ways around this secret code, though. You can employ a few clues to avoid old beer. Don't buy dust-covered beer; it's sat out too long. Don't buy beer that's displayed in direct sunlight or in a brightly lit case; it will probably be skunky. And, if you can help it, don't buy beer on sale. It could be on the brink of expiration [source: Professor's House].

Truffles: The Rarest and Most Expensive Fungi in the World
The Fascinating History of Lemonade
Food Facts