Is there a biological reason to eat three meals a day? 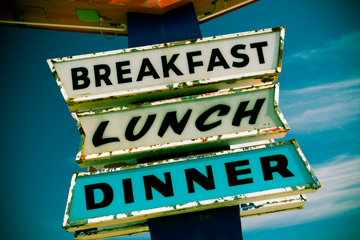 Most of us eat breakfast, lunch and dinner every day. But why?
Alan Copson/Getty Images

It's a typical Thursday, and although you've just awoken, there's a good probability you already know when you'll eat today: morning, noon and evening. While the content of your plate may vary from day to day, you rarely deviate from getting three squares. But have you ever stopped to wonder why? Is there a biological reason to eat three meals a day, or is it a societal construct so ingrained in our culture that you never question it?

If you consider how difficult it is to go against the grain — ice cream for breakfast or cereal for supper — there may be something to the idea that when we eat (not to mention what we eat at specific times of day) is related more to popular culture than to biological needs. Yale University history professor Paul Freedman, editor of "Food: The History of Taste," couldn't agree more.

Freedman contends there isn't a biological reason to eat three meals a day. The number of meals eaten every day is a cultural pattern people have adopted because there's comfort in predictability. And it's a concept that's worked for decades. Imagine uberhousewife June Cleaver from the idyllic 1950s sitcom "Leave it to Beaver" deviating from her daily preparation of a hearty breakfast, lunch and dinner for her family. Even modern television often shows families sitting down to dinner or breakfast together before heading out to school or work. The problem, Freedman says, is that this pattern no longer works with the reality of modern schedules. Fewer people leave work every day at the same time, and free time is filled with sports and screen time — leaving less room for the three-meals-a-day model [source: Freedman].

So when — and why — did we start eating three meals a day? In the 1920s and 1930s, the U.S. government began promoting breakfast as the most important meal of the day, and many people working manual jobs required a hearty noon meal to sustain them. More recently, a survey conducted by the U.S. Department of Agriculture revealed a shift away from breakfast and lunch as the day's main meals. The vast majority of respondents reported eating their main meals at noon and again at 6 p.m., with fewer taking the time to eat breakfast [source: USDA].

How did people discover wine?
Why does salt make you thirsty?
Ultimate Guide to the Bordeaux Wine Region