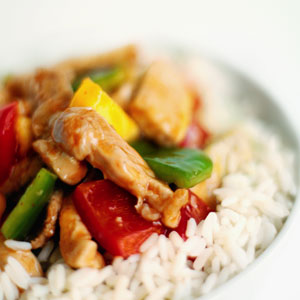 The Chinese believe food has a natural healing element. Chinese foods are not only organized in relation to flavor -- they're also categorized by which organ systems they affect. So if you become ill, the first thing a traditional Chinese doctor will prescribe is a new diet. Medicine is only given to a patient after a dietary change has proven ineffective as a cure [source: Kiple].

Of course, the correlation between health and Chinese food isn't readily apparent for most us in the West. After all, the next time you get the flu, the last thing you'll probably want to consider is ordering some Kung Pao chicken. But the disparity between a traditional Chinese dish and one found in a red and white, wire-handled pail is akin to the difference between yin and yang.

Wait, Chinese Food is Good for You?

Western Chinese food, especially meals found in the United States, have little in common with the dishes actually served in China. American Chinese food has fewer vegetables, more meat and is overloaded with MSG, saturated fat and salt. Traditional Chinese food is healthy and balanced. A starch, usually rice, makes up the bulk of the meal, and a meat and soup are served on the side. Americans typically make meat -- not starch -- the center of their meal, so healthy Chinese dishes got turned into sodium-laden, fatty meals to appeal to American appetites [source: Luo]. Today, there are more than 40,000 Chinese food restaurants in the United States. That's more than every Burger King, McDonald's and KFC combined [source: Nguyen].

Although each of China's 23 provinces puts its own spin on the cuisine, the country's foods can be broken down into four distinctive regions:

Certain ingredients are consistently used throughout the country for most meals. Onions, soy sauce, ginger and chili peppers find their way into most Chinese dishes, regardless of territory or province [source: Kiple].

If you're interested in trying some traditional Chinese food, try making Cantonese tomato beef or chicken stir-fry. Both of these recipes are quick, easy, good for you and, most importantly, better than anything that's served with a fortune cookie for dessert.

Did You Know? Monosodium glutamate, or MSG, is an ingredient found in American Chinese cuisine. Numbness, nausea, headaches and heart palpitations are all common complaints from people who have consumed MSG, although the U.S. Food and Drug Administration states that it's safe to consume in moderate amounts [source: Associated Press].