Everything You Ever Wanted to Know About S'mores

by Victoria Vogt
NEXT PAGE 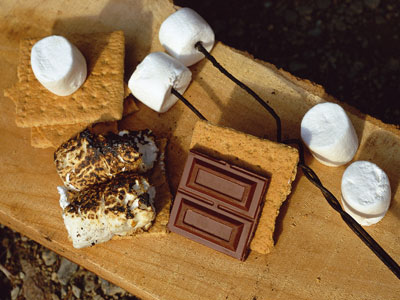 From rustic scenes of campfires and cozy winter nights in front of the fireplace, s'mores are the stuff childhood memories are made of. But who came up with this crunchy, chewy, chocolatey twist with toasted marshmallows?

No one knows the exact date, but sometime in the 1920s, people got that idea to take a graham cracker, smack on a few pieces of chocolate and top off the concoction with a warm, toasted marshmallow and another graham cracker for a mouthwatering dessert [source: Baggett]. The Girl Scouts of America gets credit for inventing s'mores -- the organization published the very first recipe in its 1927 handbook. Back then, you wouldn't be surprised to hear campers beg, "Give me some more!" of the sweet sandwich. Thus, people dubbed them "some mores," and by the 1960s, the name of this toasted treat had been informally shortened to "s'mores." Today, the classic has its own page on Facebook.com, a global social networking site, and it attracted more than 783,000 fans by July 31, 2009 [source: Facebook]. In the United States, there's even an informal holiday for the dessert called National S'mores Day. It promotes the camping experience in the convenience of your own backyard.

If you're craving the real thing but don't have time or space to build a campfire, a little creativity will help you get your s'mores on right in your kitchen. Children should be sure a parent or other caring adult supervises, for safety's sake. Using a gas or electric stovetop (or even a candle if the power has gone out), you can put your marshmallow on a stick, skewer, cooking fork or grasp it with salad tongs and hold it no less than 6 inches over the heated cooking element or low flame. Then, smear the melted goodness onto a cracker and chocolate bar, and you've got an indoor s'more!

Some enterprising people even make s'mores in the microwave oven. You can find various gizmos that claim to help you make good s'mores in the microwave, but you don't really need these gadgets. Place a graham cracker on a paper towel, then put a slice of chocolate on top. Add a marshmallow, then top it with another graham cracker. Cook it for 45 seconds, give or take, and voila! You've got yourself a s'more in less than a minute.

Now that you've got the actual cooking part down pat, you may be curious to experiment with different ingredients. In place of a slice of milk chocolate, you can use chocolate frosting, white chocolate or Nutella -- a creamy hazelnut blend that comes in a jar (look for it in your grocery store's jam and jelly section). Instead of the graham cracker, try other types of cookies or salted crackers. Some diet-friendlier recipes call for fruit spread or peanut butter as a substitute for chocolate. There's even one that recommends using a tortilla instead of graham crackers to make a sweet quesadilla. And if you're a vegan, you can substitute marshmallow fluff for the marshmallows.

At any given time throughout the year, you may stumble across toaster pastries, ice cream and even low-carb diet bars that attempt to mimic the classic s'mores flavor. 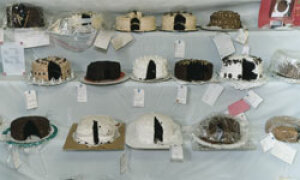 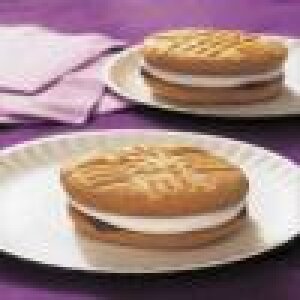