10 Best Herbs to Pair with Tomatoes 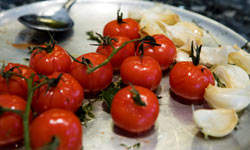 When it comes to summertime freshness, not much beats the taste of a newly picked, vine-ripe tomato, lightly sprinkled with a dash of salt. But while it doesn't take much to make this true fruit -- no, it's not a vegetable, it just goes really well with them -- taste great, the tomato is wonderfully versatile. A number of spices and flavorings only make a great addition to its natural deliciousness.

Every cook worth his or her knives should know which herbs go well with tomatoes. Most of them are very common -- you probably already have a few in your kitchen, or at least a short walk or drive away at your grocery store or farmers market.

You've probably tasted oregano in pizza sauce, but any tomato-based sauce tastes wonderful with the addition of this herb. If you pair it with basil, as is the case with many Italian dishes, you won't be disappointed. The two spices combined create a distinctive aroma that noses everywhere know is a prelude of delicious things to come.

Oregano can be used in your cooking either whole or cut up, but it's good to remember that its strong flavor can be weakened with lots of heat, so try to add it toward the end of your cooking.

This herb makes a great addition to a Greek salad -- combine it with cut-up tomatoes, cucumbers, radishes, feta cheese, olive oil, a little basil and lemon juice for an easy meal.

Oregano is often confused with marjoram because the names for the two herbs were used interchangeably for years. Oregano has the stronger flavor of the two herbs, which both come from the mint family. 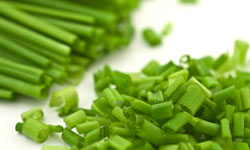 A pinch of chives for your soup
©iStockphoto.com/olszphoto

Chives are alliums and belong to the same family that includes onions, garlic and leeks. If you tend to shy away from powerful onion and garlic, don't worry -- they have a much more delicate flavor. Chives don't last long once they're picked, so be ready to use them in the kitchen quick. The subtle flavor is at its best when the herbs are raw or slightly heated, so add your chives at the very last minute.

Their light oniony taste makes them a great addition to vegetable cakes and fritters. You can make a delicious tomato and chive quiche with goat cheese for a quick afternoon snack for your kids, or you can sprinkle chives over some steamy tomato soup for a savory meal on a cold night. 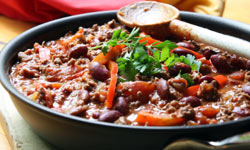 OK, so chili powder is a spice, not an herb. But it's still delicious in chili.
©iStockphoto.com/robynmac

Chili powder is a great way to add a dash of spice and heat to your cooking, whether you're serving up Indian, South American or Mexican dishes. It's typically made from cayenne or red peppers that are finely ground. Paprika, garlic, cumin and oregano are also often used in the mixture.

Chili powder is a real favorite in the United States when it comes to making chili. After you've got your ingredients of hamburger, tomatoes (freshly cut up or diced from the can) and beans ready, sprinkle a healthy amount of the chili powder into the pot and cook the mixture slowly, giving the chili plenty of time to simmer and soak up the spices.

Compared to the other herbs on this list, tarragon has a relatively recent history in European cuisine, going back only to the 16th century. This herb, with the wonderfully romantic nickname of dragon's wort, has a lovely sweet licorice taste to it that has made it a popular flavoring ingredient for salad dressings. Tarragon does lose its flavor after it's dried out, so put it to use in the kitchen right away. Also, make sure that you're using French tarragon in your cooking and not Russian tarragon, which has a coarser, less pleasing taste to it.

Tarragon can be used as the prime seasoning in a great spaghetti dish that children will wolf down and that you will love for its nutritional value and aesthetically pleasing look. Combine a tablespoon of the herb with small cut-up pieces of plum tomatoes, some ground pepper, Parmesan cheese, olive oil and mushrooms, and you've got a tasty mixture that can be spread over your pasta.

Tarragon is one of four herbs -- the others are chives, parsley and chervil -- that are together known as the "fines herbes." They form the flavoring building block of many traditional French cuisine dishes. 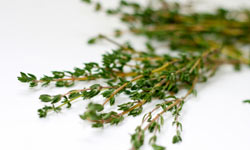 Thyme is still very flavorful when it's dried, but it's always nice to throw in some fresh herbs.
©iStockphoto.com/rja

Thyme is a mainstay seasoning in a widespread variety of culinary dishes. Common thyme is the most popular type of thyme, grown for the ease with which it mixes with the other spices in the kitchen. It's not too overpowering, but not too subtle either. Because thyme's flavor takes a while to come out when cooking, it's usually added to dishes at the beginning of their preparation.

Vegetable dishes go great with thyme, as do many soups and baked goods. You can use some thyme to create delicious thyme-flavored semi-dried tomatoes. Cut up about16 plum tomatoes into quarters and then sprinkle them with three tablespoons of chopped up thyme and salt and pepper. Bake the tomatoes at 315 degrees for about two and a half hours. Add some olive oil to the tomatoes, tightly seal them and refrigerate for a full day before serving. 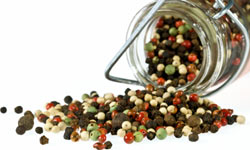 A dash of pepper might be the final touch needed for a wonderful meal.
©iStockphoto.com/Juanmonino

We're cheating slightly on this one -- pepper is a spice, not an herb. But it's also probably the only thing on this list that's used more often than thyme, and it's an absolutely necessary ingredient to have in any kitchen. Though we're mostly familiar with it as a finely ground up mixture that's paired with salt in holiday-themed shakers, pepper begins its life as a peppercorn grown on a bush.

Whether freshly ground from peppercorns or from a shaker, pepper can be added to just about any dish. A lot of seasoned cooks know to add pepper at the end of cooking because it works to preserve the more delicate flavors of other herbs used. You can use pepper in the seasoning of tomato sauces, as a salad dressing ingredient and in just about any dish you think to cook up in the kitchen.

Dill is great for pickling things like cucumbers and tomatoes. It works to bring out other herb flavorings in your cooking, though it can also overpower them if you use too much of it. Despite its very strong effect in your dishes, its flavor fades with heat, so add it at the very end.

You can make a light cucumber salad and tomato salad that uses dill. Combine cut-up tomatoes, cucumbers and a red onion with some crumbled feta cheese and dill. Drizzle over this salad a mixture of dried mint, lemon juice and olive oil. 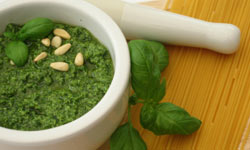 You can't have pesto without basil.
©iStockphoto.com/Drosera

Italian cooks swear by basil. The herb is often combined with oregano when used to season Italian dishes. And there's not just one type of basil -- there are 60. While you can purchase cinnamon basil, lemon basil and purple basil, the most common one found in the kitchen is sweet green basil.

Basil is a rare herb in that its flavor actually grows stronger with heat, so it needs to make an appearance at the beginning of your cooking. Try making some tasty tomato bruschetta that uses basil or sprinkle a bit of the herb into your marinara sauce the next time it's pasta night in the kitchen.

Like most of the herbs on this list, parsley hails from the Mediterranean, where it's very well regarded for its versatility in the kitchen. Power-packed with large quantities of vitamins A and C, parsley is a great way to sneak some nutritional value into your kids' meals.

Parsley is popular as a garnish because of its bright green color, but its uses go way beyond that in the kitchen. You can find ways of mixing in parsley pretty easily. Toss it in with other green salad ingredients or use it in a fish sauce. Beware -- like many other herbs, parsley's flavor fades with heat, so add it toward the end. 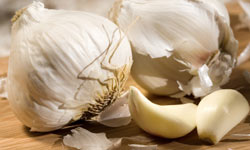 Garlic is pungent, but don't let that scare you off.
©iStockphoto.com/cglade

One of the strongest smelling herbs out there, garlic has a very long history in the kitchen. Don't let the pungency of garlic keep you from using it in the kitchen, because it's a great addition to many dishes. You can control the strength of your garlic flavoring by how you heat the cloves, but don't cook it too much -- it will cause the herb to become bitter.

Try making some of your own tomato sauce with garlic. Add garlic to pureed tomato, basil and olive oil on the stove. Give the sauce a half an hour alone on the stove to allow the seasonings to mix together. Spread this sauce on your pasta or your pizza. 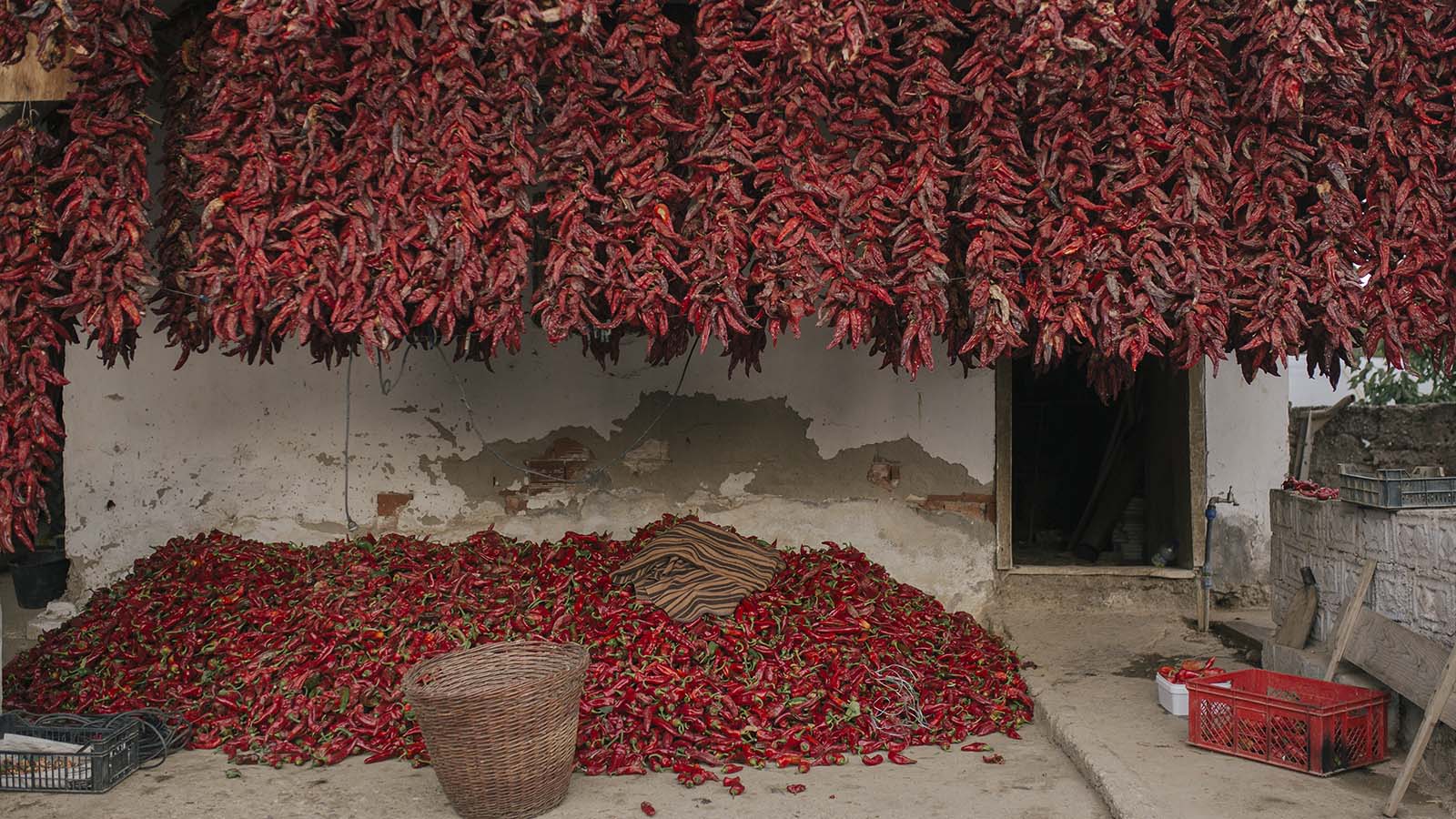 Paprika comes from the Capsicum annuum variety of red peppers, and can range in flavor from very hot to sweet.