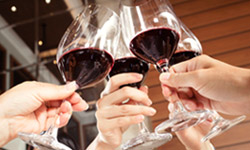 Lately, science has started to confirm what people around the world seem to have known for ages: Wine and well-being go together. Red wine appears especially promising as a defense against some of today's most serious diseases. But when it comes to identifying wine's exact benefits and how to best attain them, that's where -- to use a wine connoisseur's term -- the matter gets cloudy. When something you enjoy might also be good for you, it's tempting to blur the line between scientific evidence and wishful thinking -- especially when encouraged by attention-grabbing media reports and opportunistic marketers.

Here are five things we can say, with all reasonable certainty, about red wine's nutritional impact -- until research shows otherwise, that is.

5: A Little Red Wine Seems to Be Good for You

Wine's theoretical benefits are based on molecular biology. Living bodies harbor free radicals, molecules that have lost or gained an electron due to ordinary life processes, like breathing, or by exposure to pollutants. The loss or gain makes free radicals chemically touchy: To regain their balance, they snatch electrons from or push electrons off on other atoms. The cells that contain these victimized atoms are damaged by the exchange -- they're more prone to early death and disease-causing mutation.

Antioxidants are vitamins and other substances whose molecular makeup allows them to absorb free radicals. Research, in labs and among populations, suggests that's how they protect cells from everyday wear and tear and from numerous diseases.

Because antioxidants are destroyed in the process, the body needs to continually restock its supply. Fruits, like the grapes used in wine, are an excellent source.

Red wine's most important antioxidants are resveratrol and a group of chemicals called flavonoids. Besides their radical-mopping ability, both substances are thought to protect the heart by reducing blood clotting and cell inflammation. They may inhibit cancer by inducing natural death in diseased cells, and one study has preliminarily linked higher flavonoid consumption to lower incidence of Parkinson's disease. Resveratrol may even play a role (although it's highly debated) in activating a protein that extends cell life.

Unlike better-understood nutrients, scientists haven't established a recommended daily intake for antioxidants. The recommended daily limit for red wine is one or two 5-ounce (150-milliliter) glasses. As you'll see on the next page, enjoying in moderation is a good idea.

Resveratrol: Is That All?

4: A Lot of Red Wine Is Definitely Bad for You 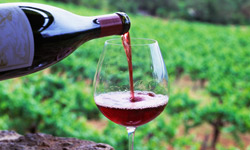 Resist the urge to just keep pouring: A single serving of wine should be only one-fifth of a bottle.
Maren Caruso/Photodisc/Getty Images

Red wine is not a case of "if a little is good, a lot is better." Health problems caused by drinking more than two glasses daily outweigh any possible benefits. In fact, it can bring about the same illnesses that partaking moderately may combat.

Consider heart disease. Heavy drinking can promote conditions that trigger heart attack and stroke, like blood clots and atrial fibrillation (irregular heartbeat), while decreasing your chance of surviving an attack. It can lead to life-threatening cardiomyopathy (weak heart) and ventricular fibrillation (erratic heart twitching). It can also aggravate contributing factors like obesity and your level of triglycerides (a type of fat in your blood).

Likewise with cancer. The body breaks down alcohol into several known carcinogens, including acetaldehyde. This compound can damage the organs involved in its metabolism: the brain, pancreas, intestine and especially the liver.

Overindulgence has additionally been linked to anemia, dementia and suppression of the immune system, allowing infections to take hold. And it doesn't take a scientific study to show that people make some unhealthy choices after three or four drinks, like choosing to drive home -- or to have yet another drink.

Our next fact looks at how the risk of fungal attack affects the healthfulness of red wine. Surprisingly, it's a good thing.

3: For Your Health, the Redder, the Better 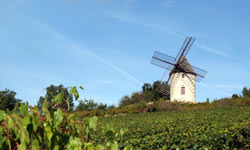 A vineyard in Burgundy, France that may be teeming with helpful fungus.
©iStockphoto.com/Leeuwtje

Knowing something about red wine varieties and particular vintages can pay off healthwise. In plants, resveratrol acts as an antifungal. Because fungus is a greater threat in cool, damp climates, grapes grown in such regions produce more resveratrol. Varieties that are most vulnerable to mold and mildew are most prolific -- a Pinot Noir, for example, from the Finger Lakes region of New York or the French province of Burgundy. And, whatever its effect on wine quality, an especially wet growing season boosts resveratrol content.

Older wines are likely to be higher in resveratrol, too. Younger wines may be filtered, a process that removes bitterness but also some resveratrol.

A similar rule holds true for flavonoids. These compounds are concentrated in grapes' skins and seeds. One type of flavonoid in red wine is anthocyanin, which gives red wines their ruby hues. A deeper red indicates longer contact with the skins during fermentation, and thus higher flavonoid content. Drier wines, which are fermented longer than sweeter ones, are likewise richer in flavonoids. Thus, a mature Cabernet Sauvignon would be a better choice than a youthful Beaujolais.

Wine loses resveratrol and flavonoids after the bottle is opened; both compounds are easily diminished by light and oxygen. However, both stand up to the heat of cooking.

2: Other Foods Provide the Same (Plus Other) Health Benefits 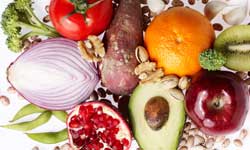 You've got lots of choices for getting your antioxidants.
©iStockphoto.com/Luis Albuquerque

Red wine is not the most efficient choice for getting your antioxidants. Antioxidants are found in all kinds of plants that fit more readily into the diet: from apples to onions, brown rice to barley and walnuts to wheat berries. These foods supply other nutrients that wine lacks, without the same consequences of overindulging. A 5-ounce (140-gram) serving of carrots, for example, supplies the antioxidants, plus vitamins A and C, potassium, manganese, thiamin, niacin and fiber. Half of its 12 grams of carbohydrates are complex carbs, the healthier kind. That nutritional bonanza comes for a paltry 60 calories per serving. And while eating an entire package of carrots isn't advised, the effects are mild compared to the dangers of drinking an entire bottle of wine.

Then there's the cost. For the price of even a $10 bottle of wine, you could buy two or three days' worth of fresh fruits and vegetables, along with all the nutrition and enjoyment they bring.

However, if you're considering resveratrol supplements, don't. The form of resveratrol in the supplements currently on the market can't be absorbed by the human body. One major pharmaceutical company recently gave up plans to market a synthetic resveratrol because trial outcomes were so disappointing.

Our final fact echoes the immortal wisdom of baseball great Yogi Berra: "It ain't over 'til it's over." In this case, "it" is the debate over red wine's nutritive benefits, and it's far from over. 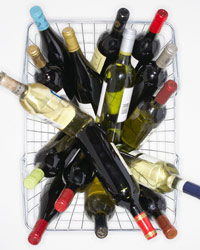 Research into red wine's health benefits demonstrates the challenges in food and nutrition science. First, most of the findings have come from experiments on lower-level organisms, including yeast, worms and flies. The amounts of resveratrol involved would kill a person who drank the equivalent in red wine -- 60 liters a day, in one study done with mice.

Findings from research on human populations have been inconsistent or inconclusive. For example, one study comparing the health benefits of different types of alcohol couldn't discount the influence of its subjects' diet and exercise habits on the results.

Also, food and nutrient interactions are complex, and our understanding is evolving daily. Just look at how recommendations on fat intake have changed over the last 10 years, from a phobia of all fats to warnings about saturated fats to a focus on trans fats. The impact of a person's environment and genetics on the way his or her body processes food remains a mystery, but could be more important than previously thought. Regarding antioxidants, scientists aren't even sure they're asking the right questions and looking at the right relationships between causes and effects. 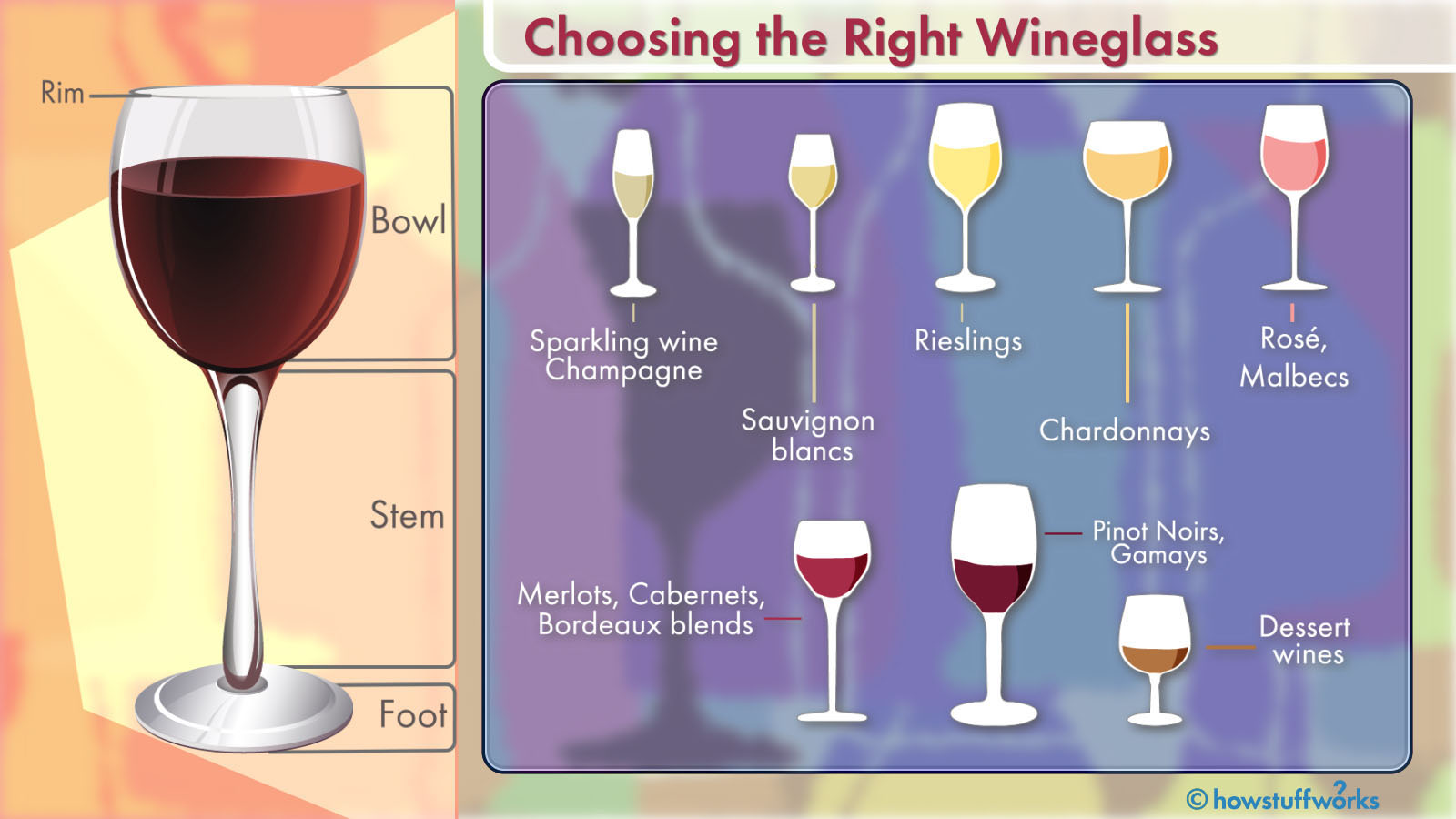 How much does the shape of your wineglass really affect the taste of your favorite pinot noir? Probably more than you realize.