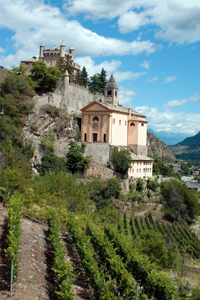 Rows of winery-bound grapes lead up to the Castle at Saint Pierre, the Regional Museum of Natural Sciences in Aosta Valley, Italy­. See our collection of wine pictures.
©iStockphoto/Gertjan Hooijer

­They say good things come in small packages. This might not always be true, of course, but it certainly applies to Italy's Aosta Valley wine region.

Aosta is Italy's smallest province. The jagged peaks of the Alps stab into the region's sky. The Dora Baltea river threads through it in a long, narrow valley. At one end is the famed crest of Mont Blanc. The closest major city is Turin (Torino), in the adjacent region of Piedmont.­

Tiny as it is, the river valley connects Italy to Switzerland and France. Indeed, Aosta is one of Italy's few bilingual regions -- its official languages are Italian and French. And where cultures overlap, interesting flavors emerge. Aosta has its own native grapes, but it has also been growing French and Swiss varietals for nearly 20 centuries [source: Abney].

The Aosta Valley has one DOC desig­nation that covers more than 20 styles of wine [source: Abney]. A DOC wine is origin-certified -- that is, its production is subject to certain controls. Aosta is known for its white wines, but its reds are notable as well. In fact, reds constitute the majority of the valley's production.

­The white Pr­ié grapes of the Aosta Valley produce a perlé that shows its mountain origins. Its local nickname is "bianco dei ghiacciai" -- the white wine of the glaciers. It is dry and citrusy, retaining an aroma of mountain herbs [source: Wein-Plus]. Perlés are lively, flirtatious wines, neither as flat as a natural wine nor as fizzy as a sparkling wine.

When wine came to the Aosta Valley is a matter of debate­. Some say it was introduced by the Romans, who wanted the region for its strategic location. Others say that the Salassi -- the natives whom the Romans conquered -- were already cultivating grapes when the empire marched in [source: Tango Italia].

Either way, the importance of the wine was quickly recognized. Romans quelled at least one revolt by sacking the local wine cellars. And many historians believe the wine had a sacred quality -- it was used in exorcisms [source: Tango Italia].

Over the ages, the area was variously ruled by the Ostrogoths, Byzantines, Lombards and the Savoy French. The first inhabitants -- predating all the empires and, perhaps, the wine -- were Celts, whose traces remain in certain aspects of the local dialect.

Not until the Middle Ages, however, did Aosta Valley wines begin to come to prominence in the rest of Europe. Aosta's location at the intersection of Italian and French cultures doubtless helped spread the world. Even today, the region's vintners are known by the French word vigneron.

In the late 19th and early 20th centuries, calamity descended on the Aosta Valley. A plague of Phylloxera fungus nearly wiped out all wine cultivation -- and did, in fact, rob the region of several native varietals that the world will never see again [source: Sonkin].

Then, as the wine growers were struggling to recover, World Wars I and II swept across Europe. The Aosta Valley -- still a border region -- was just as strategically important to modern armies as it had been to the Romans. Combat and occupation threatened to extinguish the region's spirit. But one religious man, the Abbé Alexandre Bougeat, helped keep viticulture alive.

Today, the amount of land devoted to wine production is still less than half what it was in the 1800s. What are today's vignerons growing, and how? Find out on the next page.

Isolated, rugged mountain life requires a certain set of skills. In the absence of large cities and trade routes, one must be crafty -- and independent. The inhabitants of the Valle d’Aosta came to be known as Valdostani: creative, individualistic people, part farmers and part artisans. Their festivals drew on Italian, French and German traditions to warm up the chilly Alpine winters [source: Wine Country].­

Surprisingly, only 15 hectares (37 acres) of land are devoted to ­viticulture in Aosta. Much of the land is more than a kilometer (.6 miles) above sea level. Morgex, Europe's highest vineyard at 1,225 meters (.7 miles), is located in Aosta [source: Tango Italia].

Raising grapes here has been described as "difficult and heroic" [source: Tango Italia]. The average farm is smaller than an acre, and because of the slopes the grapes must be harvested by hand. Local viticulture is so challenging that some vintners planned to abandon their vines until the mid-20th century, when the efforts of Abbé Alexandre Bougeat helped restore the Aosta Valley to prominence [source: Wein-Plus]. His work led to the formation of six cooperatives of wine growers in the early 1970s. In 1985, after his death, his work was rewarded with the designation of DOC certification to the entire valley [source: Tango Italia].

The region's greatest challenge -- the steep Alps -- is also one of the vintners' greatest boons. Though some slopes are exposed to frigid winds, others are actually protected by the mountains. The rocky peaks create tiny, temperate microclimates where grapes can flourish [source: Tango Italia]. They also keep precipitation low, which means the grapes have higher concentrations of sugars, and therefore of flavor.

Can you taste the mountains in the wines of Aosta? Some say so. Read on.

What to Eat with an Aosta Valley Wine

The cuisine of the Valle d’Aosta is like no other place in Italy. Apples and pears grow locally. Potatoes are an important starch -- more so than in the pasta-loving rest of Italy [source: Banfi Wine Explorer]. The French influence shows in the food, which tends to be more complicated than other Italian food. Whereas an Umbrian chef might simply roast a leg of lamb, an Aosta Valley cook would wrap the lamb in an herb pastry crust and then add cheese. Uncooked, air-cured ham -- called “prosciutto crudo” in the rest of Italy -- is known here as “jambon de bosses.” Fontina is a favorite local cheese, and it’s often served in a characteristically French style -- melted in a fondue pot -- and locals call it “fonduta” [source: Banfi Wine Explorer].­

If you get the opportunity to taste an Aosta wine, consider yourself lucky. Aosta produces the least wine of any regio­n in Italy. In fact, Aosta is so small, and its viticulture so difficult, that its production is limited to just more than a million bottles a year -- 90 percent of which never leave Aosta [source: Abney].

Although the Aosta Valley whites get a lot of attention, the first Aosta wine to receive DOC status -- years before the regional designation -- was a red. That was the 1971 Donnas [source: Sonkin]. Local Petit Rouge grapes produced the second DOC wine, the 1972 Enfer d'Arvier.

Donnas and Enfer d'Arvier are now considered subzones of the regional DOC. Other reds to try include Fumin, Barnet, Grenache and La Sabla. Some predict the Fumin will be Italy's next "number-one red" [source: Wine Country].

At present, the best-known winery of the valley is Les Cretes, whose Chardonnay Cuvée Bois has received top honors (tre bicchieri, or three glasses) from the international wine group Gambero Rosso. In 2005, two other Aosta whites received this honor: the Anselmet Chardonnay and Lo Triolet's Pinot Gris [source: Abney].

What distinguishes Aosta whites seems to be the Alpine peaks. The whites of the Aosta valley are praised for icy crispness and minerality. Lately, the white Petite Arvine is attracting attention for its "crisp, flinty qualities" and grapefruit-mandarin citrus notes [source: Sonkin]. The grapes are native to both Aosta and Switzerland (where they're often called Valais). Look for Les Cretes' Petite Arvine vigne Champorette 2006, or Grosjean Frères 2005.

If there's a lesson of the Aosta Valley, it's that great effort leads to great rewards. And the same holds true of the wines. If you manage to find a bottle of Valle d'Aosta wine, you're in for a rare treat.

The champion of the Aosta Valley wines, Abbé Bougeat, fought for a number of difficult causes. Not only did he work to restore the viticulture of the Valle d’Aosta, but he also led resistance against the fascists during World War II, battled popular Italian notions of family vendettas and worked to defend the Church in increasingly secular times. The wine with which he is associated is the Blanc de Morgex, from the highest vineyard in Europe [source: Isabellon]. ­