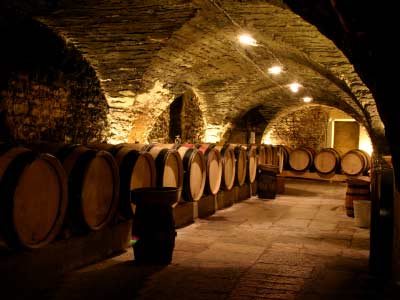 ­Few countries have impacted wine-making standards and methods as much as France has. Winemaking in France is as old as the country itself. Over the years, different segments of society have been the primary cultivators of French wine -- from the peasants who made and drank the wine in the early years to the church that almost completely controlled wine production in France f­or a period after the 13th century, and finally to the nobility who eventually took over wine production.

Wine-making in France hasn't always been a smooth process. In the early years, a Roman emperor made a decree that forced all vineyards outside of Italy to shut down. Years passed before France could begin planting again. Later, around the year 1800, the entire French wine-making industry was almost driven to a complete stop by a series of diseases that attacked the vineyards. Although progress was made in fighting these diseases, it took nearly 80 years to re-stabilize vine cultivation. Then, World War I and World War II took their toll on Europe, and again the wine industry was hurt [source: eZine Articles]. Demand for good French wine was at an all-time high, and supply was at an all-time low. Counterfeit French wines began showing up, poisoning the country's reputation. France's status as a leading wine producer was in jeopardy.

­The rough conditions of the 19th and early 20th century didn't ruin France's wine industry, however. It emerged stronger. To combat the ­counterfeit wines, France passed a series of laws called the Appellation d'Origine Controlee (which means "regulated origin name" and is commonly referred to as the A.O.C.). The goal of these laws was to define, control and protect the geography and quality of the wines of France [source: Wine Pros]. Only wines that met the A.O.C. standards were allowed to call themselves by the name of the region of France in which they were cultivated. The A.O.C. restored faith in French wines and allowed the country to reclaim its status as one of the planet's most trusted sources of fine wine.

France isn't famous for merely one kind of wine. The varieties produced in France seem almost endless. The most common French wine regions are Alsace, Bordeaux, Burgundy, Champagne, Languedoc-Roussillon, Loire, Provence and the Rhone Valley [source: Tasting Wine]. The type of wine that each region is known for depends on that area's terroir. Terroir is the term for a wine-making region's characteristics, such as soil composition, weather, the type of grapes that grow there and wine-making techniques [source: French Wine Guide]. France's geography allows it to have several wildly different terroirs, which results in several wildly different kinds of wine. Read below for information on the more famous wine regions of France:

For more information, visit the links on the next page -- then sip away!

There are more French wine regions than listed here. Some regions are smaller than others and some of the bigger ones are broken into smaller areas -- typically known as districts. If you have a favorite French wine, you might try finding the exact region and district that wine comes from because you may find many more wines with similar qualities [source: Tasting Wine]. ­