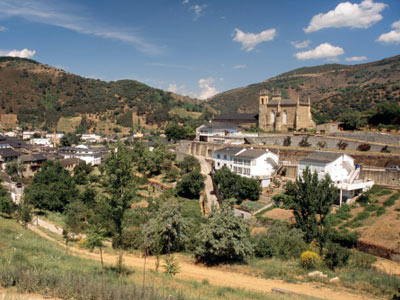 The Bierzo wine region has been gaining increasing attention since 1989. See our collection of wine pictures.­
Travel Ink/Gallo Images/Getty Images

­In the north of Spain, in Castilla y Léon, is the often­-overlooked region of Bierzo. Rural, rustic and inaccessible, without the urban bustle of Madrid and Seville or the sweeping architecture of Barcelona, Bierzo was left to itself for much of the last millennium. That's one of the reasons you may be unfamiliar with the area up until now. Recent years have brought new attention to the region ­and its wine.

Bierzo has been gaining increasing attention since it first received official recognition as a DO (Denominación Origen, which is similar to France's AOC and Italy's DOC) in 1989 [source: Apstein]. The man widely recognized for the area's resurgence is Alvaro Palacios, who, with his nephew Ricardo Pérez, began growing grapes here in the 1990s [source: Schoenfeld].

­Bierzo's renaissance is as homespun and handmade as they come. Vineyards are generally tiny here, devoted exclusively to native species, and many of Bierzo's wines are single-vineyard products. Some vineyards, in fact, produce fewer than 1,000 bottles a year [source: Schoenfeld]. That scarcity is likely to drive up the price of these Spanish wines as Bierzo attracts more and more attention. Fortunately, Bierzo's dark, expansive wines -- some of them not even oaked -- tend to age well, so you can buy a bottle as an investment when it's young. With trends leaning toward quality over quantity in recent history, Beirzo's small numbers may not hold them back.

Bierzo's first industry was not wine -- it was mining. Romans colonized the area and put slaves to w­ork extracting gold from stones at Las Medulas. This was a serious operation, involving hydraulics and the construction of an artificial lake. Later, mining efforts would focus on coal and iron [source: Parode]. The high mineral content of the Bierzo soil is still important, but today people are benefiting from it via grapevines.

Barbarian tribes -- the Visigoths and the Suevi -- invaded after the Roman Empire fell. The Visigoths apparently mingled less than the later invaders, the Moors; Visigoth language left few traces in Spanish, although Visigoth architecture is still visible in some areas [source: Spanish Fiestas]. Although the emperor Justinian planned to oust the Visigoths, after several centuries the plan was abandoned, and the Visigoths' leader, Recarred, converted to Catholicism [sources: Berschin, Spanish Fiestas].

Religion has always shaped Bierzo. An early abbot, Valerius (or Valerio) of Bierzo, is responsible for much of what we know about the area in the early Middle Ages [source: Berschin]. Valerius also developed an influential educational model that came to dominate rural schools [source: Udaondo].

In the ninth century, the remains of St. James were discovered and then interred at the cathedral of Santiago de Compostela, and Bierzo became a destination for holy pilgrims [source: Parode]. You might recognize it as the destination of Chaucer's pilgrims from Canterbury.

The Compostela pilgrimage reshaped the Bierzo countryside. Cacabelos was a stop along the trail, and the city still commemorates such vagabonds each year [source: Cellar Tours]. Monks cultivated wine to refresh the weary travelers, and more and more monasteries and churches sprang up along the trail. The Knights Templar even took an interest in the pilgrims' safety, constructing the massive castle in Ponferrada [source: Parode]. Tourists today can still duplicate the journey on foot [source: Davies].

In the early 1800s, during the Peninsular War, northern Spain became a battleground for forces beyond its control: the French army, led by Napoleon Bonaparte, and the English, led by Wellington. After Wellington's overwhelming victory at Vitoria, the retreating French ransacked Bierzo's monasteries and villages. France thereby lost the support of Spain -- a loss that would prove crucial in Napoleon's tumble from power a few years later [source: Jackson].

Despite all this activity, Bierzo remained stubbornly rural. Ponferrada is still the largest city, but its population is only about 65,000 [source: Parode].

Some historians maintain that the Visigoths' early presence in Spain is part of why the Bierzo region remains so rural. Under the reign of the Visigoths, Spanish cities emptied out, and people embraced the feudal lifestyle of living off the land [source: Spanish Fiestas].­

The dominant red grape in Bierzo is the Mencía, although Garnacha Tintorera, Tempranillo and a few other grapes are also used to make Bierzo's red wines. Native whites include Godello, Palomino, Doña Blanca and Malvasio. Of all these, it's the Mencía that has been driving recent interest in the wines of Bierzo. The grape is cultivated almost exclusively in the north of Spain, and its flavor is reliably unique -- fruity, tannic but not harsh, with mineral notes [source: Cellar Tours]

Though it focuses on native grapes, Bierzo's viticulture is somewhat continental. Mountains protect the low-lying region from the ocean-driven extremes of temperature that threaten the rest of Spain. Much of the soil is or was once alluvial; centuries ago, the area used to be a lake [source: Parode]. Fertile alluvial soils still line the Sil River.

Higher, in the steep, rocky slopes, soils are chiefly slate with a high mineral content, and the temperature and climate are more like those of France than of the rest of Spain [source: Cellar Tours]. Soil in some areas contains quartzite, a further defense against high temperatures. Alvaro Palacios swears that wines reflect the flavors of wild local herbs such as jara (both citrusy and warmly spicy). Elm and chestnut trees dot the hills, and lush green ivy clings to the walls and rocks [source: Schoenfeld].

Bierzo combines hot days with cool nights -- a combination widely believed to be key to the development of strong, intricate flavors in wine. Sugars develop in the daytime heat, which can reach 105 degrees Fahrenheit (40.5 degrees Celsius). But when that heat is regularly interrupted, the sugars become nuanced rather than overwhelming [source: Schoenfeld].

Aspects of Bierzo will make you feel as though you've traveled backwards in time. Some villages still have communal bread ovens and laundry pools, and many people still live in small, centuries-old stone houses. Likewise, most vineyards in Bierzo are relatively small operations -- family-owned tracts of about 2 acres (.8 hectares). Because the mountains are so steep, cultivation and harvesting still rely on horses and mules [source: Apstein]. Outputs are therefore fairly low. For economic survival, many growers have come to rely on cooperatives.

On the next page, we'll take a look at the wines that are beginning to draw so much international attention.

For a long time, many believed that Mencía grapes were the ugly-duckling cousins of Cabernet Francs, brought to Bierzo by Campostela pilgrims. Like many modern disputes, this one was resolved with a DNA test. The result? Negative. Mencías are very much their own grapes [sources: Garr, Apstein].­

In the hands of Bierzo's vintners, Mencía grapes produce complex wines that are fruity but still subtle and expressive, with silkiness to balance their earthiness. Common designations include joven (young), crianza, reserve and gran reserve [source: Apstein]

By all accounts, Alvaro Palacios is the Bierzo winemaker to watch. Since the 1990s, Palacios and his family have been a driving force between the resurgence of the region, with at least one commentator proclaiming: "Palacios is Bierzo" [source: Apstein].

Palacios's 2005 Pétalos Bierzo is one in the growing number of biodynamically produced wines. Biodynamics treats the soil as a living being, and biodynamic farmers devote themselves to practices, such as crop rotation, designed to preserve the health of the soil. The Pétalos ages for just four months in oak. But it's a dark, full-bodied wine, plumy, spicy and warm [source: Garr]. Also pay attention to Palacios's 2005 La Faraona, rare San Martin (a small-batch, single-vineyard wine), edgy Moncerbal and richly floral, fruity Las Lamas [source: Apstein].

Paixar produces only about 9,000 bottles a year. If you can find it, wine writer Michael Apstein suggests that you make the purchase. Of particular note are the 2001 and 2003 Paixar Bierzos. Both clearly reflect the vineyard's slate soils with mineral-accented, black cherry and other fruit flavors [source: Apstein].

The wines of Luna Beberide are rarely included on Bierzo's DO label, because they incorporate non-native grapes, such as Cabernet and Merlot. Nevertheless, vintner Bernardo Luna has been another of the major forces behind the area's recent renaissance, and his wines deserve mention too. Also worth noting: Luna produced one of the few solid contenders to emerge from the scorching summer of 2003. Try the 2003 Tierres de Luna or the 2004 Reserva [source: Apstein].

Other Bierzo producers to watch for include Pittacum and Castro Ventoso, as well as the Vega Montan Bierzo Godello.

With so many exciting contenders, Bierzo may well emerge as the little wine region that could. In fact, some observers expect it to surpass Priorat. Now is definitely the time to discover the splendid, unusual Mencía grape.

To learn more about Spanish wines and related information, visit the links on the next page.

Does the Devil Wear Prada a Tope?

The winery of Prada a Tope produces not just wines but also grape-based beauty products. Other products include various preserves and other delicacies, such as candied chestnuts (similar to French marrons glacés) prepared "with no machinery other than the loving, delicate female touch" [source: Prada a Tope].­