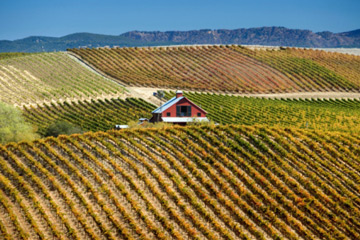 Looking at the world of wine from a 21st-century perspective, it's easy to forget that American wines (for this piece we're limiting that to U.S. wines), are relative newcomers. A few of us may still have bellbottoms in our closets from the 1970s. In wine time, that barely registers on the glorious grape-making scale when compared to wine crafting titans like France and Italy. In that short time, though, the number of wineries in the U.S. has grown from 200 to 4,000. There are wineries and vineyards in all 50 states -- even Hawaii and Alaska. Where Americans may have been largely wine neophytes 30 years ago, that's changing, too. Americans make great wine these days, and we also consume wine in large quantities. In 2010, the U.S. surpassed France as the No. 1 wine consumer worldwide.

We could wax poetical about the special allure of wine, its history and its ability to transform an occasion into an event. The simpler truth here, though, is that wine is a big business that's getting bigger every year. The U.S. isn't the only country that's entered the winemaking industry in a big way, either. Countries like Australia and Argentina that wouldn't have registered on any wine aficionado's radar a few decades ago both made it into the 2009 top 10 list of wine producing countries.

Advances in the science of grape cultivation and specialized grape varieties designed to thrive in specific microclimates are making it easier to grow superior grapes in challenging landscapes. Deft winemakers have also developed a sophisticated understanding of the changing tastes of the international wine-drinking community. When you add to that the potential revenue presented by emerging markets like China, wine and winemaking becomes art, craft, science and commerce all matured and bottled into one tantalizingly delicious package.

Let's take a closer look at regional American wines from sea to shining sea. They represent a fascinating mix of ingenuity and an abiding desire to create the finest wines on Earth.

Although the most significant wine making region in the U.S. is California's Napa Valley, there are four major U.S. winemaking states as well as other winemaking regions with respectable vineyard acreage and wineries with growing reputations. Winemakers in the United States are hard to pigeonhole. There are both traditionalists and innovators among its hardworking viticulturists. Two consistent qualities they share, though, are a fierce dedication to creating superior wines and a conviction that technology is an important confederate in achieving that goal.

California - If you think of the Golden State when someone mentions American wines, it shouldn't be much of a surprise. California produces almost 90 percent of the wine made in the U.S. and nearly 75 percent of the wine sold here. Numerous wine grape varieties are grown up and down the state, taking advantage of the favorably mild climate and natural air conditioning provided by mild Pacific Ocean breezes. California grape harvests are relatively consistent from year to year, too. The state doesn't see much rainfall during the grape growing season, a major variable that can cause big challenges in other parts of the world. Instead, California grapes receive much of the water they need via closely monitored irrigation systems.

The prime location for grape production for the region is about an hour and a half drive from the San Francisco Bay area -- Napa Valley. Famous throughout the world, Napa Valley is a narrow, curving band of relatively flat, fertile land nearly perfect for growing grapes. The southern portion of the valley is coolest, favoring Chardonnays and Pinot Noirs, but grapes are grown throughout the valley floor and on the hills and mountainsides to the west and east.

Oregon - The Beaver State has been making wine for more than 40 years, and three of its most successful grape varieties are Chardonnay, Pinot Noir and Pinot Grigio. There are a number of wine growing regions (AVAs) in Oregon, from the Willamette Valley to the Columbia and Walla Walla Valleys that Oregon shares with Washington State.

Washington - Where most of Oregon's vineyards are coastal, in Washington State, the largest growing region is east of the Cascade Mountains in the Columbia and Yakima valleys. This dry but well irrigated zone is a prime location for growing Cabernet Sauvignon, Cabernet Blanc, Bordeaux, Chardonnay, Semillon and Syrah grapes. It's also a good spot for growing the grapes for one of Washington's most prized exports, Merlot. A second large wine producing region is in the Puget Sound area, a spot not far from Seattle where many of Washington's larger wineries are located.

The Great Southwest - Including the states of Arizona, New Mexico, Utah, Colorado, Oklahoma and Texas, the American Southwest encompasses great geographical diversity and numerous challenges, from arid growing conditions to punishing elevations. There are lots of success stories, though, from the fine Cabernet Sauvignon wines of Texas to the superior Merlots and sparkling wines of New Mexico.

New York - There are three primary wine regions in New York: Long Island, Finger Lakes and the Hudson Valley. Finger Lakes has the distinction of being the largest wine growing area east of California with its Chardonnays, Rieslings and Pinot Noirs. New York's cold winters can be a challenge for grape growers. Hardy Native American varieties (yes, there are some) like the Concord and Delaware have historically been very successful, but more traditional European Vitis vinifera grapes have been grown successfully over the last few decades, increasing New York's cache for producing world class red and white wines.

The Spanish conquistadors and their complement of missionaries may have brought their favorite grape varieties to North America, but it wasn't until after the end of World War II that winemakers began developing their craft in earnest.

More than 27 million people visited U.S. wineries in 2007. That equates to about $3 billion in sales. Wineries have become more than just wine producers and sellers, too. They're often venues for gatherings as diverse as weddings and business meetings. Some wineries have onboard restaurants and gift shops and are also lively tourist attractions. That says something for the ingenuity of savvy wine producers, but it says even more about the changing American attitude toward wine. Most major newspapers have regular wine reporting, including: The New York Times, The Wall Street Journal, The Washington Post and USA Today. If there's a spectacular vintage out there or an underrated wine that'll fit the average budget, someone will be shouting it from the rooftops -- and people will be listening.

The United States jumped to the top spot as the world's biggest consumer of wine in 2010. Although we may fall behind France in per capita consumption (their rate is about five times higher than ours), wine is still hugely popular.

Let's take a look at a few fun wine facts to see how Americans enjoy their vino:

The debate between red versus white wine has been going back and forth for the last 40 years. In 1970, red wine was the overwhelming favorite with more than 75 percent of the market. By the year 2000, light, fruity and economically priced white wines were the clear winner with a 70 percent market share. Hold on, though: In 2007, these contenders were much more evenly matched, with red wine sales increasing to around 45 percent, in part because of the growing popularity of domestic Merlots. Actually, the real answer may be in your house right now. What are you drinking?

Winemakers are becoming more sensitive to the green movement with the addition of organic wines that are made from pesticide- and fungicide-free grapes.