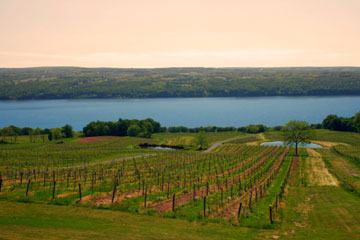 The Finger Lakes region of New York is home to dozens of wineries, many of which are known for their rieslings and ice wines.
iStockphoto/Thinkstock

A short trip east of New York City, Long Island is home to the North Fork and Hamptons wine regions. This region is extensive -- 120 miles (193 kilometers) long -- and the atmosphere can vary from the upscale Hamptons to more rustic areas like Montauk. Most of the area's wineries are on the far eastern end, in the North and South Forks. Both forks produce a lot of red wines, especially Bordeaux, thanks to a long growing season with warm weather that's ideal for growing quality red grapes.

Also near the city, you can check out the pastoral Hudson Valley region. Known for its stunning views, small farms and gourmet food, the valley has been home to winemakers as far back as the 1670s. The region boasts a rich history, including "America's Oldest Winery" -- Brotherhood -- established in 1839. Because the climate in this region isn't ideal for growing grapes, many winemakers in the Hudson Valley buy grapes from surrounding regions, like Long Island and the Finger Lakes, though there are wineries like Millbrook that do grow their grapes in the valley.

Named for the glacial lakes throughout the area, the Finger Lakes area is home to dozens of wineries. The region is probably best known for its riesling, a white dessert wine, and its ice wines. There's more to do in the area than just wine tasting, though. You can check out local farmers markets and museums, hike or bike through Sugar Hill State Forest, ride horses or head out on the water to enjoy the Finger Lakes themselves.

Niagara is the youngest wine region in New York. It wasn't an official American Viticultural Area (AVA) until late 2005, and the newly recognized region has a handful of major wineries, as well as dozens of smaller wineries in the surrounding areas. Because of the chilly temperatures in Niagara, its wineries tend to focus on ice wines (wines made from grapes that have frozen on the vine).

Not only do wineries in each of these regions offer tastings, but you can also experience the bounty of wine country in a party atmosphere by checking out some local wine festivals. Read on to learn more.

Whether you're a wine newbie or a seasoned sommelier, a wine festival is a fun way to expand your wine knowledge while sampling some great wines. Since New York's wine country is so large, there are festivals year-round in many different regions, focusing on everything from different wine varieties to local food and drink to winemaking. You can find wine festivals in New York City and the surrounding regions, or head upstate for a more rustic festival experience.

While the city isn't an official AVA, it boasts some well-known wine festivals celebrating the wines of New York state.

In the fall, you can check out the New York City Wine & Food Festival, which benefits two organizations working to fight hunger in New York and nationwide: Food Bank for New York City and Share Our Strength. Rather than focusing on local wines, this star-studded festival features celebrity chefs and well-known foodies like Paula Deen and Martha Stewart, as well as famous wine experts like Anthony Giglio and Mark Oldman.

Outside of the city, in Long Island, you can check out the Long Island Wine & Food Festival. The annual summer festival features tours and tastings at North Fork vineyards, along with local food pairings and music. Long Island's wines have a less than stellar reputation, and this festival is a great chance to see how far the North Fork wineries have come.

At the Hudson Valley Wine & Food Fest, you can sample and learn about regional and non-regional wines, taste local foods, and refine your culinary skills at one of the cooking demonstrations. Festival organizers have also teamed up with New York's MTA transit system, so festival goers can travel from the city without a car.

The Niagara Wine Trail has frequent wine events, and each summer they present the Wine and Culinary Festival. The festival showcases local wine and food in a relaxed atmosphere. The Artpark, where the festival is located, is right on the beautiful Niagara River.

Probably the most well-known wine festival in New York is the Finger Lakes Wine Festival at Watkins Glen. The annual summer festival is a three-day party of tastings and togas. If you're traveling with someone who's not a wine enthusiast, they can head down to the Brewer's Garden to try out some local beers while you sample wines from more than 80 local vineyards.

Later in the summer, visit America's Grape Country Wine Festival, featuring wines from across New York state along with country music from local and national artists. Looking to sample specific varieties of Finger Lakes wine? The fall Riesling Festival or the winter Ice Wine Festival may be the event for you.

If you prefer a wine country experience without the festival environment, wine tours might be more up your alley. Up next: Check out some of the fun ways to tour New York's wine country. 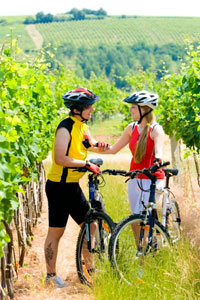 A bike tour around local vineyards is a great way to get an up-close view of the grapes -- and a workout, to boot!
iStockphoto/Thinkstock

Wine tours are a fun, and often educational, way to explore New York wine country. There are wine tours for every type of traveler -- you can get adventurous in a kayak or hot air balloon, or keep things a little more low-key and travel by car or limo.

A hot air balloon ride is one of the most breathtaking ways to take in the picturesque wine country scenery. Companies like Liberty Balloon Co. take you up in the air for a guided wine tour. You can launch from wineries, lakeside, or a local park or bed-and-breakfast for a unique wine country experience. Remember to dress in layers, because balloon rides normally start early in the morning when it's chilly, and it warms up while you're up in the air.

More active travelers might want to check out New York Wine Country by bike or kayak. Cyclists can take guided bike tours between wineries, like a tour of North Fork wineries by Adventure Cycles & Sports. Bike tours often include a picnic lunch along with visits to regional wineries. Many New York State wineries are located near lakes and rivers, so kayak trips are a great way to see the countryside and get a little exercise at the same time. You won't see too many rapids in upstate New York, but you will encounter beautiful scenery, wildlife and, of course, wine!

Looking for a more relaxed trip through wine country? You can experience the charm of the Finger Lakes without any paddling on a cruise. Companies like Cayuga Lake Cruises take you out on the water where you can enjoy cocktails and regional foods on their ferry boats.

A bus or limo allows you to check out more wineries while still taking things easy. Every region has bus and limo tours, so it's best to do some research to find a tour that's right for you. Tours can range from very specialized, private events, like the Hudson Valley Wine Country Bachelorette Wine Tour, to a professionally guided luxury limo tour of Long Island wineries.

Of course, you can also rent a car and tour New York wine country on your own. Traveling solo lets you explore at your own pace. The trick is to plan ahead, so that you don't spend more time on the road than at tastings. You'll need to find wineries you want to visit, and some areas of New York wine country even have trip-planning tools on their Web sites to help you create your own customized tour.

For more wine articles, check out the links on the next page.