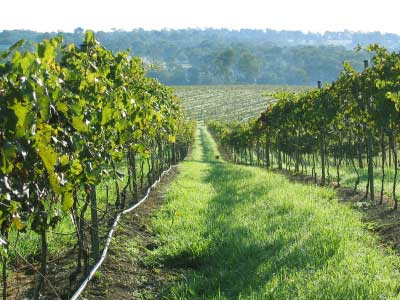 Australia’s Queensland has been producing a variety of wines for more than 100 years. See more wine pictures.
©­iStockphoto.com/Ginevre Marlow

­The "land down under" is known for many things -- kangaroos, didgeridoos, dingoes, koala bears, eucalyptus trees and the late Steve Irwin, just to name a few. But as you can see, wine didn't make that quick list. Australia is often overlooked as a wine-producing powerhouse, yet its viticulture is rich and full of history. For a young country and state, Australia's Queensland has been in the wine producing business since its establishment almost 150 years ago. Today, this wine region has expanded to cover almost 3,700 acres (1,500 hectares) of land.

In Queensland's early years, its wine was sold locally, but as word of quality grapes and wine spread, the wine producing market started to expand. Today, there are several smaller regions that together comprise the Queensland wine region. Only two of these, South Burnett and the Granite Belt, are officially recognized by the Geographic Indications system, but the other areas are all distinct enough that they have been divided into their own unofficial regions by Queensland citizens.

These smaller regions are:

­­While in the younger years, viticulture was not a priority in Australia, and therefore Queensland, the establishment of the Ballandean Estate helped change that. In the 1960s, the estate was built in what is now the most recognized region in the area, the Granite Belt. After settlers, who were mostly of Italian descent, had spent years cultivating grapes, they were sure the area was capable of great wine. After producing quite a bit of well-received red wines, the Granite Belt and the Queensland region had made a name for themselves. Today, the region is known for its light, fruity wines that match the area's cuisine and carefree atmosphere.

As Queensland continues to produce its quality Australian wines and experiment, it continues to gain popularity. Its fan base has spread beyond the local borders, first spreading across Australia and then expanding across the globe.

Australia's history is unique. Like North America, and many of today's established countries, it was settled by Europeans. But unlike the America's, Australia was settled for the purpose of imprisoning law breaking citizens. And at the same time, there were people living on Australia that had been there long before European settlers came along.

Before European settlement, the Torres Strait Islanders and Aboriginals lived for thousands of years in Queensland, believed to be present even 30,000 years ago [source: Queensland]. The Aborigines were around to see and adapt to the changing face of Queensland. Now arid, with dry grasslands, the area was once cool and covered with vegetation.

The dry Australia we're accustomed to today is what early European settlers would see when they first saw the area in 1660. They settled the area as a penal colony in a region Britain deemed New South Wales. It wasn't until 1839, when the penal colony closed, that the land was available for sale and public settlement.

No longer a forced home for convicts, Brisbane grew in importance both socially and economically. It had a great shore location, making it a popular port. This easy access to the water also meant water travel to Sydney or Europe was possible. Because of its successful growth and distance from the government of New South Wales, the region began to consider independence. In 1859, Queen Victoria agreed and approved the separation. With this, the colony of Queensland was established and the population began to flourish [source: Queensland]. This is when grape growth and wine production began.

While you may not be able to name too many Australian wines, you're probably familiar with Fosters, a famous Lager beer native to the land down under. Two Aussie brothers named William and Ralph Foster began serving the family brew in Melbourne back in the late 1800s. Today, it's Australia's most wide selling beer brand, exporting to more than 150 countries [source: Foster's].

Agriculture of the Queensland Wine Regions

Agriculture isn't at the forefront of the Australian spotlight, at least in the minds of those who aren't involved. This seems true of viticulture in particular, which requires quality grape growth. You might think grape cultivation would be impossible in the Queensland climate. After all, grapes will dry out in extreme heat, and no doubt, there are areas of Australia that reach sweltering temperatures.

While the climate of Australia does present challenges in the agriculture department, it hasn't stopped Queensland. In this large region, the many areas actually have very different climates.

The Granite Belt is the most talked about production area of the Queensland wine region. Being one of the most plentiful areas in Queensland, it makes sense that it has the best climate for grape growing. At an altitude of .5 to .6 miles (800 to 1,000 meters), this area strays from your preconceived ideas of desert like Australia. It actually has cold, snowy winters [source: Hidden Creek]. Likewise, the Darling Downs and South Burnett also have cold seasons. These areas thrive and produce the most traditional wines.

Queensland's tropical northern regions have found success by experimenting. They may not be capable of growing all grapes, especially delicate ones, but they have other fruit that harvests well year after year. In recent years, the area has produced many alternate wines using these fruits instead of grapes [source: Wine].

The Queensland Government has taken on a big role in the wine industry by not only appointing a government minister responsible for overseeing the promotion of wine production and tourism, but by also devoting a section of workers to the wine industry development. The branch leads seminars and conferences on topics such as business and export strategies to help wineries grow and succeed. They also have a part in the Queensland College of Wine Tourism, which has a winery, cellar door and bistro to teach the art of winemaking and business to its students [sources: Hidden Creek, Wine].

In the world of wine, Queensland is still somewhat of a rooky in comparison to the producers in areas where viticulture spans centuries. This reflects in the final products Queensland presents. They are still experimenting and testing their options by working with alternative ingredients and foreign grapes.

Some of the most popular or practiced varieties of the Queensland wine region include:

As mentioned previously, Australia has gotten creative and experimental with their wine production in an effort to allow the tropical northern region a piece of the market. While these areas don't have plentiful grape output, they have successful growth of other fruit crops like pineapple, mango and passion fruit. In recent years, the area has used these fruits as a substitute to produce new varieties of wine [source: Wine].

The Shiraz is probably the regions most popular selection. That variety, along with dessert wines, has done well in Queensland. Because of that development, experimenting with the sweet tropical fruits of the north could prove fruitful for the region -- in more ways than one.

Be sure to check out the links on the next page for additional wine-related information.

Some ties are hard to break. Although Australia is its own nation, it still has a strong connection to the mother country. The royal family of Great Britain is also considered the royal family of Australia. The ranking king or queen appoints a Governor-General based on the advice of the current Australian government. This official represents the king or queen and usually only acts when approached by Australian officials [source: Department of Foreign Affairs and Trade].