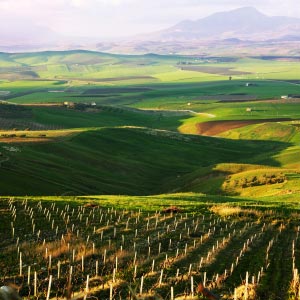 The Sicilian soil is ideal for growing grapes but almost useless for the cultivation of any other crops. See more wine pictures.
iStockphoto/Peeter Viisimaa

­Sicily -- if your first thought about the largest island in the Mediterranean Sea is a certain group of gangsters in the "Godfather" trilogy, you're in for a treat. The island's location has helped it become one of the world's most diverse melting pots. At one time or another, it was inhabited by the Siculians (after which it was named), Phoenicians, Greeks, Romans, Byzantines, Arabs, Normans, Germa­ns and Spanish. In 1860 it became part of the new Italian state. All of these cultures contributed to Sicily's history and influenced the production of wine throughout the region -- though not all of their influences were positive.

The Strait of Messina separates Sicily from the Italian mainland. At its narrowest point the strait is a mere 2 miles (3.2 km) wide [source: Britannica], so you can stand on either shore and easily see the other. Recent plans have been put in motion to build a 3.2-mile (3,666-meter) bridge that will connect the island to the rest of Italy. When it's finished in 2012, it will be the longest bridge in the world [source: Frittle].

­Wine is one of Sicily's greatest contributions to the world. This is in large part because of its soil, which is ideal for growing grapes but almost useless for the cultivation of any other crops. If the soil were richer, wine production might never have evolved on the island as it did. The mild Mediterranean climate also helps, as do the mountains and hilly terrain, which provide ideal locations for vineyards.

Of all the wines that Sicily has to offer the world, the most famous are dessert wines. In fact, the majority of DOC wines from the island are sweet wines, such as Marsala -- which was largely responsible for bringing worldwide attention to Sicilian wines. (See page 4 for more about the DOC system.)

Today, vineyards cover 329,923 acres (134,000 hectares) of ­Sicilian land and produce a whopping 213 million gallons (806 million liters) of wine every year [source: Wine Country]. The region is in constant competition with the Apulia wine region to produce the most wine in Italy.

Check out the next page to learn about the history and culture of Sicily.

­The ancient island of Sicily was covered in grapevines long before ­the Greeks got there. Many of the grapes considered to be native to the area were actually brought in by the Phoenicians. According to Greek legend, however, it was Dionysus who brought the vine to Sicily. While embarking on an arduous journey across the seas, the god of wine brought with him a vine and carefully looked after it along the way. When he finally got to Sicily he planted the first vineyard at Naxos.­

The Greeks weren't the first to make wine in Sicily. In fact, archeologists have found evidence that the island's inhabitants were drinking wine as far back as the 17th century B.C. However, when the Greeks arrived in the eighth century B.C. they introduced viniculture techniques, pruning styles and a new take on varietal selection. The result was better quality and larger quantities of wine.

When the Romans took control of Sicily, they spread wine from the region around the empire. It didn't take long for the wines to gain recognition throughout the ancient world. One Sicilian wine in particular, Mamertino, garnered a following among nobles and is said to have been Julius Caesar's favorite [source: Di Wine Taste]. As was the case when Byzantines conquered the area, the church did a great deal to facilitate growth in wine production. Wine was essential for celebrating mass, and religious leaders became experts in viniculture.

From A.D. 872 to 1061, wine production in Sicily declined, but developments directly following that period rejuvenated the island's export business. This, in turn, helped stabilize the economy. The next important step in the history of Sicilian wine would come many years later. In 1773 an English merchant by the name of John Woodhouse would help bring Marsala to the world. Riding on the success of Marsala, Sicilians made huge developments in wine production, and wine soon became an important pillar of the island's economic structure. During the years to follow, some of Sicily's most famous wineries were founded.

In 1881, Phylloxera invaded Sicily and entire vineyards were destroyed. In the same decade, exports to France stopped after a commercial agreement with Sicily was broken. Wine production on the island didn't recover for more than half a century, and when it did, the market had changed completely, and Sicilian winemakers had to adapt. Fortunately, their ability to adjust, as well as a new attention to quality, helped wine producers in Sicily regain their place as some of the best in the world.

Where does it all go?

Sicily and the Apulia wine region produce the most wine in Italy - but Sicilians consume less wine per person than anywhere else in the country [source: Wine Country]. ­

Sicily has a Mediterranean climate. In simple terms, that means summe­rs are hot and the winters aren't that cold. It almost never rains in the summer months and only very lightly during the winters, which are famous for being brief. They generally start in December and last only until February. The spring and fall are warm and sunny, and frost is rare in the winter, making Sicily an ideal environment for wine production.

Sicily is also lucky to have rocky soil. This would be a problem with almost any crop other than grapes, but for wine production it just happens to be ideal. Rocks absorb heat throughout the day and release it slowly at night. People used to use rocks as "warming stones," placing them by the fire and then putting them in their beds at night. We apply the same principle to growing grapes in rocky soil. As the rocks release heat throughout the night, they help the grape vines maintain an even temperature while the air around them gets cooler. Another advantage of rocky soil is its ability to stay dry. Grape vines don't like to be wet, and rocky soil allows their roots to grow deep while staying dry.

With Sicily's perfect climate and rocky soil, it's no wonder that it has more vineyards than any other region in Italy. It's also not a surprise that so many different varieties of grapes are able to thrive there. While many of the grapes are considered native to the island, others were brought from different regions in Italy because of their affinity for producing high yields. However, with recent efforts to place more focus on quality and less on quantity, Sicilian winemakers are concentrating on the use of native varieties. Some of the most famous grapes considered to be native to the island are Frappato, Mantellato, Nerello Mascalese, Nero d'Avola and Perricone (red wine), and Carricante, Catarratto, Grecanico, Grillo, Malvasia delle Lipari, Muscat Blanc and Zibibbo (white) [source: Di Wine Taste].

They’ll Be Growing on the Mountain When They Grow­

Mountains provide wine producers with a unique ability to choose their climate. Generally, specific temperatures are associated with different heights along the slope of a mountain. This allows vintners to choose the best altitude for whatever variety of grape they plan to grow [source: Neuva Cocina Foods].

Marsala is one of Italy's most famous wines -- it might be the most important wine to e­ver come out of Sicily. Marsala brought acclaim and worldwide recognition to Sicily when an English merchant named John Woodhouse began exporting the dessert wine in the late 1700s. It provided an alternative to port and sherry, which were incredibly popular at the time, and it wasn't long before Marsala overtook its competitors. Unfortunately, a lack of standards led to a lack of quality, and Marsala eventually became used more for cooking than anything else. It wasn't until the 1980s that standards improved and Marsala began to regain its place in the world as a great wine.

Incredibly, Marsala can last more than 50 years. There are five types of Marsala, which is made from Grillo, Inzolia, Catarratto and Damaschino grapes. They're distinguished by the amount of time they spend aging. Marsala Fine is aged for at least one year; Marsala Superiore, for two years; Marsala Superiore Riserva, four years; Marsala Vergine, five years; and Marsala Vergine Stravecchio, 10 years [source: Di Wine Taste].

Sicily has 19 DOC areas. Interestingly, nearly 90 percent of DOC wines in Sicily are dessert wines like Marsala [source: Wine Country]. Two DOC wines that should be mentioned alongside Marsala are Pantelleria and Lipari, sweet wines that have gained reputations for quality all around the world.

A favorite among Sicilians that you won't find on a list of DOC wines is Regaleali [source: Regalis]. It's a wine produced by Count Tasca d'Almerita that comes in a few varieties. Regaleali is classified as IGT, which is generally considered lesser quality than DOC. However, IGT classifications are quite common in Sicily. and if you avoid them you'll definitely miss out on some great wines.

Pop open a bottle and visit the links on the next page to learn more.

How did people discover wine?
Diamonds Are a Wine's Best Friend
The Right Glass Could Make Your Wine Taste Better