Browse the article Ultimate Guide to the Veneto Wine Region 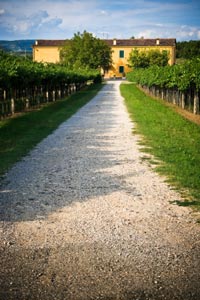 Veneto, one of Italy’s most notable wine regions, is made up of seven provinces. See more wine pictures. ­
iStockphoto/Giorgio Fochesato

­Italy is widely recognized as a top tier wine producer and Veneto, one of the nation's wine regions, is a great attribute. The region produces many DOC, or denominazione di origine controllata, wines and plays an important role in the entire country's wine industry [source: Veneto Chamber of Commerce]. Within Veneto, a region that begins on the edge of Lake Garda, there are seven provinces that distinguish the different areas:

Veneto and its provinces have made a name for the region throughout the Italian wine industry, but what exactly makes it so special? Many feel that the conditions f­or planting­ grapes are ideal, and that size and variations of the region let Veneto produce a wide variety of wines. These are both important elements for any area trying its hand at viticulture, but the advantage presented by having the port city of Venice shouldn't be ignored.

­Venice, the city of love, is Veneto's most famous asset. The coastal city has had access to the rest of the Mediterranean, Africa, and even Asia as long as travel has been an option. This access to the world has proven very beneficial throughout the region's history. Easy access to trade led to a thriving economy. With money came an appreciation for finely crafted things and a willingness to pay more for them. Veneto wineries were only too happy to oblige and the quality of winemaking within the region quickly became the highest and most state-of-the-art on the planet.

Beyond Venice, the climate of Veneto has made wine production low maintenance, nurturing grape vines with ease. The size of the region and its differing conditions from border to border allow for nearly every type of grape to grow in a climate seemingly tailored to its needs. That's why the region is able to produce such a wide spectrum of wines.

The Veneto Wine region has been home to viticulture since the Bronze Age, making it one of the old­est homes of winemaking in the world. The world has come to expect great things; after all, 3,000 years of practice should hone some pretty spectacular skills.

Before the Roman Empire came to Veneto, there were just little villages and cities here and there and most of the wine produced was simply consumed by the peasants who made it. Winemaking was not yet a livelihood for the region, but more of a hobby. The Romans changed all that when they showed up around 200 B.C. It was the Romans who cut the landscape into a patchwork of fields to be used for growing assorted things, with much of land being dedicated to grape vines. It was also Romans who started the settlements that would eventually become known as Verona and Venice, the source of the regions wealth and influence [source: WineCountry.it].

The Roman rule held steady until the Barbarians came into the picture, changing everything. The people of the region had to scatter and hide near the coasts, in the marshes or even flee to nearby islands. Eventually the Barbarian invasions came to an end and for those who stuck it out, the rewards were quick. The port of Venice began to provide money to the region, allowing the artisans of the area to perfect their skills, making Veneto and its great cities home to the finest art, fashion and wine in the world. The port then brought these crafts all over the world, creating demand for their superior products. It was not long before Veneto was the center of the fashion and winemaking industries. As such it was a very sought after part of the world, at one point part of France, part of Austria, and eventually once again part of Italy due to repeated conquering and trading of the region [source: Boglewood.com].

You would think that after all this time making history the region would take a break and let someone else push the envelope for a while. You would be wrong. Veneto continued to make history. It became home to the first Italian school for vine growing in 1885 and it also hosted the first-ever wine tourism road [source: WineCountry.it].

Real Italian Wine Made in France

When the Veneto region was conquered by France, it had the honor of being conquered by Napoleon Bonaparte himself. He marched through the Veneto region, taking cities for France along the way until he captured the real prize, Venice [source: Boglewood.com]. For a short time, Veneto, and subsequently Venice, were considered to be French land, but this didn’t last long and within a century, Veneto was once again in Italy. ­

Agriculture is rich in this northern area. Like much of Italy, it's got access to water by not only sea but also­ by river. Throughout the area, there are many different climates and growing conditions that make it possible for the region to grow a vast variety or grapes and use that variety to provide the globe with world-class wines. The region boasts northern plains, rolling hills and coastal fields all unique in their soil conditions and climates, make nearly every type of combination of the two possible.

Speaking of variety, let's explore the southwest area of Veneto. This area, around the city of Verona, has miles and miles of rolling hills covered with wineries. The colder seasons are much more tempered in this area than in the northeast. This also happens to be the area where Amarone was first crafted [source: Vintages].

In the northeast of the Veneto region, you will find plains. The summers there are typical of the area, but the winters are much more intense than in other parts of the region. These conditions are idea for the Merlot and Cabernet grapes that are grown there [source: The Italian Trade Commission].

The areas near the Adriatic Sea are known for many types of grapes, particularly Raboso and Verduzzo [source: The Italian Trade Commission]. This area's climate is, by far, the most temperate in Veneto. The sea keeps the winters warmer and summers cooler than other areas, making it one of the most perfect climates on the planet for growing any number of grape varieties.

The government body that keeps track of wine zones in Italy says that there are more than 20 distinct districts within Veneto’s borders.­ Each district is known for its own unique take on the winemaking process, meaning that literally hundreds, per­haps even thousands of different wines originate in Veneto. Other wine regions may produce large amounts of wine, but few can claim to foster the wide variety of wines that Veneto does. Read on to discover just a few of the many varieties.

I Live by the Ocean, but Summer in the Mountains

Grape vines have preferences when it comes to climates, just like people. Some vines love a real winter to give them some down time between grape growing, other vines just want to live by the sea where the summers are cool and winters are warm. The grape vines of the Veneto region are lucky, they have real winters, temperate coastal areas and everything in between [source: The Italian Trade Commission]. ­

The wines that flow out of Veneto are as different as the individual zones within the region. Veneto produces red wines and white, and there are wines that hearken back to the earliest most traditional wines known to man and wines that are made from techniques just discovered in the last few decades.

Let's start with the classics. Soave, made from the Garganega grape, is the region's most popular white wine [source: Veneto Chamber of Commerce]. Another classic wine from Veneto is Valpolicella, which is created using the more traditional method of drying the grapes no more than a few weeks [Source: Vintages].

Amarone is currently the most talked about wine from the Veneto region [source: Veneto Chamber of Commerce]. This exciting new take on wine creation has the wine world talking. Although the process of making Amarone differs only in that the grapes are dried for months at a time before they are juiced, the difference is extremely noticeable. This extra drying creates an intense, flavorful wine with fuller bodies than most other types of wine. The process can be applied to nearly any type of grape with equally exciting results.

Amarone is not the only new wine from the regio­n, people are also buzzing about Ripasso [source: Vintages]. For this particular wine, they take unpressed skins and brew them in with a Valpolicella. Adding these fresh grapes to the already made wine tricks the drink into fermenting again. After this second fermentation, you have Ripasso, a louder, more powerful take on Valpolicella.

To try to list all the great wines of Veneto, would be harder than counting all the grapes in a large vineyard. So we've just looked at a few types in this article. But for more information about Veneto and wine-related topics, visit the links on the next page.

Recioto della Valpolicella is made in similar fashion to Amarone, but they dry the grapes for at least a month longer. Then when they are making the wine, fermentation is stopped to give the wine a powerful sweet taste. Ironically this process of over-drying the grapes, results not in a dry wine but a very sweet one [source: Vintages]. ­