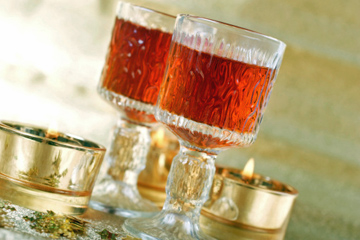 A nice Port will dress up any festivities!
iStockphoto/Thinkstock

Although it's now being produced in a number of winemaking countries, including the U.S., Australia, India, Argentina, Canada and South Africa, authentic Port or Porto wine is unique to Portugal.

During one of the many wars between the British and the French, Britain found itself in need of an alternative wine supplier. Portugal was a good candidate, but all that sloshing back and forth in transit made Portuguese wines a bit unstable. To create a more reliably consistent product, a little alcohol was added to fortify the mixture. Fortified wines are wines to which alcohol is blended as part of the production process. In Port, the alcohol is usually a neutral brandy.

There are more than 80 grape varieties grown in Portugal's Douro Valley and surrounding regions for use in the production of Port wine. Many are exclusive to Portugal, which makes Port wine from Portugal unique. It's so unique, in fact, that only Portuguese-made Port can carry the identifying term "Porto" on the label. Port takes its name from the Portuguese city of Oporto, situated where the Douro River enters the Atlantic Ocean. It's the second largest city in Portugal and well placed to receive and distribute wine and other products produced from Douro Valley harvests.

Port is recognized as a fortified red wine, but there are a number of varieties and one notable exception to this rule:

Most often served as a sweet dessert wine, Port is wonderful with chocolate and has often been paired with cheeses like stilton and cheddar. As a finish to a fine meal, Port is an elegant choice that works with the most decadent desserts, tart flavors like aged cheese, or all by itself.

If you love the idea of serving a vintage Port at your next party, you can now find these premium wines in half-bottles, just the right size for a small gathering. For the best results, serve Port at or a little lower than room temperature, say around 64 to 66 degrees Fahrenheit.

Get Over It! Boxed Wine Is Better Than Bottled
How to Taste Wine
Ultimate Guide to the Tuscany Wine Region