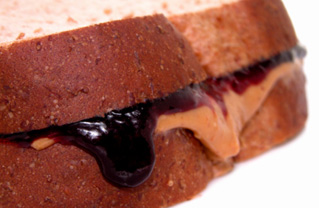 What's the history of this classic?
iStockphoto.com/Thinkstock

Few things conjure up images of domestic idyll the way peanut butter and jelly does: the doting mother watching on as her young child tries, for the very first time, to make the sandwich and ends up smearing peanut butter all over pristine granite countertops. The story is charming because it strikes a chord with so many of us—and even after consuming hundreds, if not thousands, of these little three-component sandwiches during childhood, many consider the peanut butter and jelly sandwich (aka PB&J) an easy, quick, and affordable lunch in their adulthood.

But where does the peanut butter and jelly sandwich actually come from? And what makes the trio of ingredients we’ve accepted as totally mundane so utterly divine when layered together?

As is the case with most iconic sandwiches, there’s much disagreement about the precise origins of the PB&J. In the early 1900s, peanut butter, having been a hit during the 1904 World’s Fair, was considered an elegant food served in Manhattan tea rooms. Pairings common at the time may seem a bit strange in retrospect: pimento cheese, celery, and watercress, all piled on crackers. (Today, of course, celery and peanut butter is still a popular kids’ snack.) In the ‘20s and ‘30s, the brands Skippy and Peter Pan were born, and during the Great Depression peanut butter-only sandwiches were popular: peanut butter was cheap, pre-sliced bread had just been introduced, and this was something hearty, filling, and nutritious that even kids could put together themselves.

It wouldn’t be until World War II that jelly joined the club: along with peanut butter and bread, it was on the U.S. military’s ration list. Once they returned home, American soldiers sought out the foods they consumed overseas. These three foods flew off supermarket shelves as a trio: two without the third just wouldn’t fly anymore.

One might be tempted to break out the old “the rest is history” cliché from here, but no exploration of PB&J would be complete without a hat-tip to Goober, Smuckers’ product that combined peanut butter and jelly into a single jar. However ill-advised the idea seemed (and seems), the two-in-one deal that hit shelves in 1968 is still alive and well: today Goober is sold in strawberry, grape, and chocolate varieties.

Traditionally a PB&J consists of two tablespoons each of peanut butter and two tablespoons of jelly mixed harmoniously onto a bread of your choice, although white bread will appeal most to purists. Ask any parent, though, and this idea of a precise ratio becomes laughable. Creating one’s own version is a ritual, and with the countless varieties of peanut butters (smooth, creamy, reduced fat, low fat) and flavors of jelly the act of eating the sandwich has evolved from an American tradition to a deeply personal one. In the United States, grape remains the top seller, with strawberry following closely behind. Factor in other variables: the all-important slicing strategy (diagonal versus horizontal, say) or the crust-versus-no-crust debate, and things really get crazy. Today that leaves us in perpetual quest to refine what some nutritionists consider the perfect sandwich, a blend of whole grains (depending on the bread), protein, “good” fat, and fruit (provided the jelly doesn’t have added sugar).

Leave it to the pros to make things even more complicated: in 1998, Peanut Butter & Co. opened as a peanut butter-centric restaurant in Manhattan’s Greenwich Village, offering items such as the “PB&J Club,” a supersize version of the traditional sandwich, the “Bagel Nosh,” peanut butter and jelly served on a toasted bagel, and the “White Chocolate Wonderful Sandwich,” featuring a ritzy combination of white chocolate peanut butter, orange marmalade, and crunchy almonds. Then there’s New York sweet spot Led Zeppole, whose quirky selection of Italian ices includes—yep, you guessed it!—a peanut butter and jelly flavor. Interesting, yet even that takes a backseat to PB&J-flavored liquor, which Van Gogh Vodka released this spring to the shock and awe of an unsuspecting populace. The flavor profile sounds pretty good—it’s said to combine peanut butter, raspberry, and vanilla—but why try and drink the sandwich when the real thing is so satisfying?