What Exactly Is Jell-O Made From?

What Makes Jell-O Wiggle and Jiggle?

When you buy a box of Jell-O (or another brand of gelatin) at the grocery store, you get a small packet of the powdered gelatin with sugar or artificial sweetener and artificial flavorings and colors added. At room temperature, the gelatin protein is in the form of a triple helix. This is a fairly ordered structure not unlike that of DNA. With DNA, two chains of nucleotides are twisted together in a spiral pattern resembling a ladder, in a design known as a double helix. In the gelatin protein, three separate chains of amino acids (called polypeptide chains) have lined up and twisted around each other. These amino acids are mostly glycine, proline and hydroxyproline. Weak bonds hold the helix together. To make a gelatin mold, you add boiling water to the powdered gelatin. You then stir the mixture for about three minutes until the gelatin dissolves completely.

What happens to gelatin when you add boiling water? The energy of the heated water breaks the weak bonds that hold the gelatin strands together. The helical structure unwinds, and you're left with free-floating protein chains. When you add cold water and refrigerate the Jell-O mixture, the chains begin slowly to reform into the tight triple helix structure. As it cools, the mass acts like a sponge, soaking up the water you added. But in some places, there are gaps in the helix, and in others, there is a tangled web of polypeptide chains. The chains form a sort of net, and the net traps water inside pockets between the chains. The protein net is strong enough that the Jell-O holds the shape into which it's molded. But because of the water trapped in the pockets, the Jell-O has the "jiggle" that kids love. Scientists call the form of Jell-O at this stage a colloid, or the substance formed when tiny particles are dispersed within a solution.

See the next page to learn more about uses for gelatin. 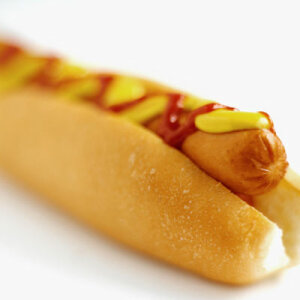 What are hot dogs made from? 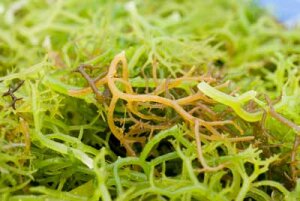