11 of the Worlds Most Expensive Foods 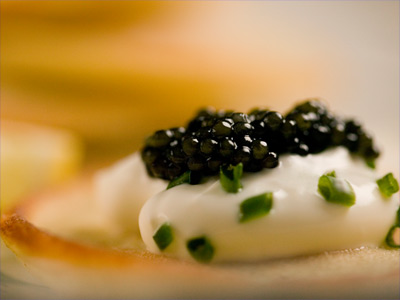 Caviar is without a doubt one of the world's most expensive foods.
C Squared Studios/Getty Images

Food is one of the basic needs that all living things have in common. But all foods are not created equal, especially in terms of price, as the following list illustrates.

At $99, the Double Truffle Hamburger at DB Bistro Moderne in Manhattan gives new meaning to the term whopper. The burger contains three ounces of rib meat mixed with truffles and foie gras stuffed inside seven ounces of sirloin steak and served on a Parmesan and poppy seed bun, with salad and truffle shavings. For penny-pinchers and calorie counters, the Single Truffle version is a mere $59.

The world's most expensive caviar is a type of Iranian beluga called Almas. Pale amber in color, it comes from sturgeons that are between 60 and 100 years old. A 3.9-pound container will set you back $48,750.

In 2006, a chef in northwestern England created the world's most expensive pie. Based on a traditional steak and mushroom pie, the dish includes $1,000 worth of Wagyu beef fillet, $3,330 in Chinese matsutake mushrooms (which are so rare that they are grown under the watchful eyes of armed guards), two bottles of 1982 Chateau Mouton Rothschild at a cost of about $4,200 each, as well as black truffles and gold leaf. The pie serves eight with a total cost around $15,900, or $1,990 per slice, which includes a glass of champagne.

Forget Poilâne's famous French sourdough at $19.50 a loaf. In 1994, Diane Duyser of Florida noticed that the toasted sandwich she was eating appeared to contain an image of the Virgin Mary. She kept it for ten years (it never went moldy), before selling it to Canadian casino Goldenpalace.com for $28,000 in 2004.

At $1,000, the Grand Opulence Sundae at New York's Serendipity certainly lives up to its name. Made from Tahitian vanilla bean ice cream covered in 23-karat edible gold leaf and drizzled with Amedei Porcelana, the world's most expensive chocolate, this indulgence is studded with gold dragets and truffles and topped with dessert caviar.

Americans love their pizza. And at $1,000 a pie (or $125 a slice) they better be able to put their money where their mouth is. The Luxury Pizza, a 12-inch thin crust, is the creation of Nino Selimaj, owner of Nino's Bellissima in Manhattan. To order this extravagant pizza, call 24 hours in advance because it is covered with six different types of caviar that need to be specially ordered. The pie is also topped with lobster, crème fraîche, and chives.

Our list of the world's most expensive foods continues with the priciest boxed chocolates.

The World's Most Expensive Foods, 7-11

At $2,600 per pound, Chocopologie by Knipschildt Chocolatier of Connecticut is the world's most expensive box of chocolates. The Chocolatier, opened in 1999 by Danish chef Fritz Knipschildt, also sells a decadent dark chocolate truffle with a French black truffle inside for a mere $250. But don't expect to just drop in and buy one on a whim . . . they're available on a preorder basis only.

Since the 19th century, the club sandwich has been a restaurant staple. But thanks to English chef James Parkinson, the von Essen Platinum club sandwich at the Cliveden House Hotel near London is also the world's most expensive sandwich at $197. Weighing just over a pound, the sandwich is made of the finest ingredients, including Iberico ham cured for 30 months, quail eggs, white truffles, semi-dried Italian tomatoes, and 24-hour fermented sourdough bread.

For $1,000, this gigantic concoction comes stacked with caviar and an entire lobster encased within its eggy folds. Still, one might expect a seafood fork made of platinum and a few precious stones within to justify the price of a few eggs (albeit with a few added trappings). Nicknamed "The Zillion Dollar Lobster Frittata," the world's most "egg-spensive" omelette is the objet d'art of chef Emilio Castillo of Norma's restaurant in New York's Le Parker Meridien Hotel. A smaller version is also available for $100.

Saffron, the most expensive spice in the world, has sold in recent years for as much as $2,700 per pound! The price tag is so high because it must be harvested by hand and it takes more than 75,000 threads, or filaments, of the crocus flower to equal one pound of the spice! Most saffron comes from Iran, Turkey, India, Morocco, Spain, and Greece, and in the ancient world the spice was used medicinally and for food and dye. Prices vary depending on the quality and the amount, but high-quality saffron has been known to go for as much as $15 per gram (0.035 ounces).

And the award for the most expensive food goes to...a fruitcake? Encrusted with 223 small diamonds, this cake (which is edible without the gems, of course) was for sale for an unbelievable $1.6 million in December 2005. One of 17 diamond-themed displays in a Japanese exhibit called "Diamonds: Nature's Miracle," the masterpiece took a Tokyo pastry chef six months to design and one month to create.