Every Halloween, bags of triangle-shaped, yellow, orange and white candies fill trick-or-treat bags all over the country. And there are many bags to fill: According to the National Confectioners Association, candy companies produce nearly 35 million pounds (15.8 million kilograms) of the corny candy each year. That's about 9 billion individual pieces of the sweet treat.

Candy corn is a sweet replica of dried corn kernels. It's considered a "mellow cream," a name for a type of candy made from corn syrup and sugar that has a marshmallow-like flavor. Although candy corn tastes rich, it's actually fat-free.

Most people know the traditional candy corn with three stripes – yellow at the bottom, orange at the center and white at the top – but it also comes in a variety of other colors and flavors depending on the holiday:

The traditional variety is most popular in the fall, especially around Halloween. In fact, Oct. 30 is National Candy Corn Day. However, candy corn didn't become associated with Halloween until after World War II, when trick or treating became popular.

Candy corn has been around for more than a century. George Renninger of the Wunderlee Candy Company invented it in the 1880s, according to the National Confectioners Association. Perhaps because its look was reminiscent of farm life, it caught on with city folk nostalgic for a rural past. At any rate, its tri-colored look was revolutionary for the candy industry at the time. The Goelitz Candy Company started making candy corn in 1900 and still makes it today, although the company name has changed to the Jelly Belly Candy Company.

The recipe for candy corn hasn't changed much since the late 1800s, but the way it's made has changed quite a bit. In the early days, workers mixed the main ingredients – sugar, water and corn syrup – in large kettles. Then they added fondant (a sweet, creamy icing made from sugar, corn syrup and water) and marshmallow for smoothness. Then they poured the mixture into kernel-shaped molds in cornstarch trays. They had to do this three times, walking backward, one for each color. Because the work was so tedious, candy corn was only available from August to November.

Today, machines do the work. Manufacturers use the "cornstarch molding process" to create the signature design. A machine fills a tray of little kernel-shaped holes with cornstarch, which holds the candy corn in shape. Each hole fills partway with sweet white syrup colored with artificial food coloring. Next comes the orange syrup, and finally, the yellow syrup. Then the mold cools and the mixture sits for about 24 hours until it hardens. A machine empties the trays, and the kernels fall into chutes. Any excess cornstarch shakes loose in a big sifter. Then the candy corn gets a glaze to make it shine, and workers package it for shipment to stores. 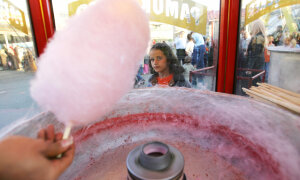 How do they make cotton candy?

How does Pop Rocks Candy work?