How to Develop a Child's Palate 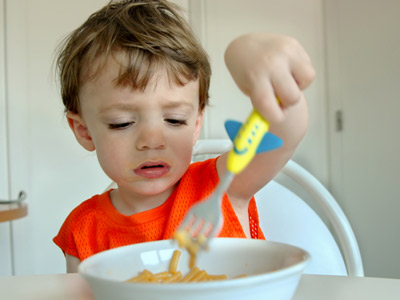 Picky eaters are par for the childhood course. Some kids are just never adventurous eaters. Others who would eat anything at 18 months suddenly will eat only two or three different foods at the age of two.

Children typically outgrow extremely narrow eating habits. They're a natural part of growing up. Wariness of new foods, or food neophobia, is in part an evolutionary adaptation designed to protect our ancestors from eating harmful substances. But food neophobia, along with the peanut-butter-only diet and a simple refusal to eat what's on the plate, are also developmental phenomena.

First, children's taste buds aren't fully formed, so they literally don't have the taste for all the foods adults eat. From a psychological standpoint, young children are often not terribly fond of variety in general (witness a toddler's insistence on wearing the same beloved shirt every day), and they are also in the process of asserting their fledgling independence. What better way to say, "You're not the boss of me" than by choosing not to eat what the boss cooks?

The problem, of course, is that the peanut-butter-only diet doesn't meet all of a person's nutritional needs. Plus, a willingness to try new and different foods at a young age can be a good start for a lifelong habit of open-mindedness. So parents persevere in trying to broaden their youngsters' palates, with varying results.

While there's no fool-proof method of getting kids out of a food rut, there are some good ways to increase the chances of success:

Involving kids in the choosing and preparing of new foods makes it more likely they'll decide to eat it. Bring them along to the grocery store and let them pick out the vegetable for dinner. When preparing it, give them a job, like sprinkling the salt (already measured out by you!) or tossing it in the sauce.

If eating is an activity, instead of a chore, a picky eater might forget she's so picky. An 18-month-old loves to dip things, so serve a new food with a dip she already likes. Or prepare some new, colorful snacks for an intimate "tea party."

If she fills up on juice and pretzels, it's less likely she'll eat the not-so-sweet, not-so-salty carrots and chicken on her plate at dinner time.

Pasta, breaded chicken and french fries are fine, but not exclusively. Don't automatically turn to the beige-food kids' menu when you go out; order the kids half portions of colorful "adult food," or share your own entrée.

You may have to introduce a new food dozens of times before they'll bite. Exposure is the key. Just keep putting it on the plate, and chances are they'll eventually eat it.

Just keep in mind, "stick to it" doesn't mean "insist." Forcing your kids to eat something won't do much good beyond some momentary nutritional value, and will probably end up producing a person with food and eating issues.

As with all good parenting, as long as the child isn't in danger (if you're concerned about nutritional deficiencies, absolutely contact the pediatrician), the keys to developing a child's palate are patience, flexibility and a healthy dose of perspective: There's a 99 percent chance they'll outgrow picky eating as naturally as they outgrew chewing on their own feet [source: BWH].

Fear of new foods is called food neophobia. It involves distaste ("I don't like that flavor"), a perception of danger ("That food doesn't seem safe") and disgust ("Get out of my mouth right now!"). Disgust is most often associated with texture [source: TMN].