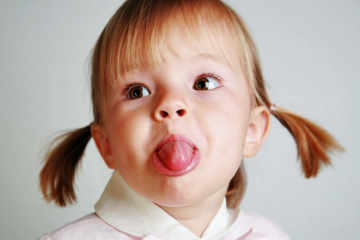 Kid-Friendly Recipes Image Gallery Her taste buds will only get wiser with age. In the meantime, see pictures of kid-friendly recipes.
©iStockphoto.com/RoyalFive

Recent studies are changing the way science looks at the sense of taste in a number of significant ways. For over a generation, school children have been taught that the tongue could distinguish four tastes: salty, sweet, bitter and sour. Recently, a new taste has been added, the flavor-enhancing taste associated with MSG, and others may follow. We used to think that variations in taste conformed to a specific geographical pattern across the tongue too, with sweet and salty tastes registering on the tip of the tongue, and sour taking over along the sides. Now, we know that many areas of the mouth can record multiple tastes, although some taste receptors are better at distinguishing certain tastes, like sweet, than others [source: Berry].

The Anatomy of Taste

These revelations in the way we experience one of our most important senses opens the door to other questions about the ways taste is experienced by different people and by all people at different times in their lives.

The average adult has about 10,000 taste buds. Taste buds, or taste receptors, are grouped inside papillae, the small bumps you see on your tongue. The taste buds themselves are composed of lots of small receptor cells, between 50 and 150, which actually process tastes [source: University of Washington].

Some people have dense concentrations of certain types of papillae, making them sensitive to strong flavors. People who like bland foods may actually taste more of the flavor in what they eat than the rest of us. What we would consider just enough sweetness or saltiness might seem overwhelming to them. These super-sensitive people are called super tasters and exist on one end of the taste spectrum. On the other end are older people who've lost some of their sense of taste, or people with medical conditions whose sense of taste is limited or absent. As we age, we can lose up to half of our taste buds, which is one of the reasons food can taste less flavorful to us as we get older [source: Gavin].

Taste is one way in which infants and young children experience the world, and as their bodies develop, so do their taste buds. Folk wisdom suggests that children are more sensitive to certain tastes than adults, but because taste can be subjective, the mechanism that causes taste sensitivity in youngsters can be difficult to analyze. Taste is a composite sense that's partly determined by the taste buds, but also affected by a food's aroma, its appearance and even previous experiences with that or similar foods.

A study conducted by the University of Western Sydney, New South Wales, Australia, comparing young male subjects between the ages of eight and 10 to adult males found that the adolescents had a higher anterior papillae density than the adults, making them more sensitive to sucrose or sweet flavors [source: Segovia].

Another study conducted at the University of Copenhagen involving 8,900 Danish schoolchildren discovered that there's a noticeable change in taste perception as a child develops into a teenager. Teenagers show an increased ability to distinguish flavors, together with a decreased preference for sweet flavors [source: University of Copenhagen].

Because smell, appearance and our expectations have a lot to do with the way we perceive taste, children who are tasting things, perhaps for the first time, are probably relying on their sensitive taste buds as well as their sense of smell and other visual cues to decide if a food tastes good or not. Our taste buds introduce us to a particular flavor, but the experience of eating is a packaged deal. If we think we'll like a food, there's a much better chance that we actually will.

In a study conducted by Stanford University, two identical meals, one in a plain wrapper and one in a package from a popular fast food chain were offered to a group of children. Even young children associated a better taste experience with the name-brand selection, suggesting that marketing and expectation have an impact on perceived taste, even in children [source: Center for Health Study].

Should you use mascarpone or ricotta for cannoli?
How to Develop a Child's Palate
Food Fighting 101