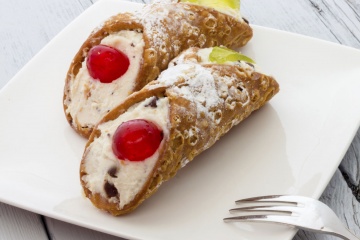 The exact origin of cannoli isn't entirely clear. Fortunately, that has no bearing on deliciousness.
© fpwing/iStock/Thinkstock

"Leave the gun; take the cannoli," said Clemenza, a man who clearly had his food priorities straight, in "The Godfather." But what were those cannoli filled with, ricotta or mascarpone?

Cannoli is a sweet Italian pastry, a tube-shaped, crumbly shell made from fried dough with a sweet, creamy filling. Some preparations include the addition of candied fruit (commonly cherries or orange peel), pistachio nuts or sometimes cocoa or cinnamon.

The dessert is considered an Italian specialty, but it's actually considered to be of Sicilian descent. People have been eating the sweet treat since ancient times. Roman philosopher and orator Marcus Tullius Cicero mentioned cannoli-like pastry as long ago as 70 BCE, and some historians consider it likely became popular as a special indulgence during Carnivale, a Christian celebration occurring between Epiphany in early January and the beginning of Lent -- like Mardi Gras, but with cannoli. Some trace the dessert's history to the harem of Caltanissetta, and that "cannoli" actually comes from the Arab, "Kalt el Nissa" (which means city of women) [source: La Cucina Eoliana e Siciliana].

Regardless, though, whether it was a decadent Carnivale dessert or a symbol of fertility, the thing about classic cannoli that Italians do agree on is this: a cannolo (that's a single piece of the pastry) is filled with a ricotta cheese mixture sweetened with sugar (or honey) and a flavoring such as orange-flower water (or vanilla or rosewater). So, then, why have you likely eaten varieties filled with mixtures other than ricotta? We've heard of cannoli filled with mascarpone, cream cheese, even custard or ice cream. While they may all be sweet and creamy, they're not all true to the dessert. 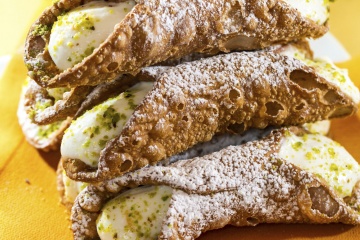 Who decides what goes into school lunches?
What foods are good for a child's brain?
5 Easy Dinners for Kids