Save vs. Splurge: Pacific or Atlantic Salmon (farmed vs. wild)

by Sarah Winkler
NEXT PAGE 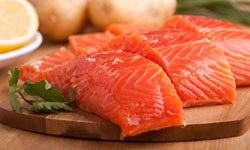 Is wild Pacific salmon worth the extra cost?
iStockphoto.com/Olgna

In the last 20 years, salmon farming has tripled the world supply of salmon. In 1985, only 6 percent of salmon you'd find at the grocery was farmed. But in 2000, 58 percent came from farm production, according to a University of Albany study.