Who's afraid of pink slime? 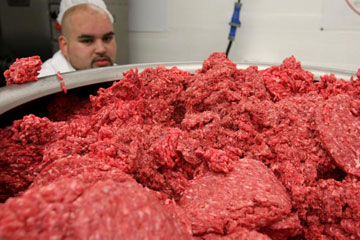 Ground beef passes through a machine at a meat packing and distribution facility.
Justin Sullivan/Getty Images

It sounds like a fun gross-out toy for kids. But, in fact, many of us actually chew, taste and gulp down this horrible-sounding stuff regularly. Pink slime, aka Lean, Finely Textured Beef (LFTB), is used as filler in some frozen entrees, meatballs, canned foods, hot dogs and fast food, for example. But LFTB has become most notorious for its role in ground beef. Up to 15 percent of the "meat" in ground beef packages we buy at supermarkets is actually LFTB, and a former USDA employee said at one time that LFTB was in 70 percent of those packages, according to ABC News.

Before LFTB, fat trimmings left over after meat processing were scrapped, or used in dog food or oil. Trimmings were subject to carry E. coli and salmonella, since they're extracted from an area close to the hide of the animal; therefore, they were regarded as unfit for human consumption. In the 1990s, however, the owner of South Dakota-based Beef Products, Inc., devised a way to treat this scrap meat, separating the fat from the lean with heat and then penetrating it with gaseous ammonia -- that's right, ammonia -- to remove the bad bacteria. The resulting product, LFTB, was sold in frozen bars at an affordable price to food manufacturers.

When LFTB emerged, the USDA had no problem at all with it becoming an ingredient in other foods like ground beef and didn't require any special labeling, since it was, in essence, still beef, and ammonia was part of a process, rather than an ingredient.

But in 2009, when a New York Times article outed the ammonia treatment and dubbed LFTB "pink slime," the public had a different reaction to "lean, finely textured beef." The "pink slime" moniker actually originated from a 2002 internal e-mail Gerald Zirnstein, a USDA scientist (now whistleblower) wrote to his colleagues, in which he stated that he thought it was fraudulent to call LFTB "beef." Among other things, the Times article revealed that in 2003, Georgia officials returned a shipment of Beef Products' frozen LFTB when cooks at a prison complained that it reeked of ammonia -- so much so that they thought it had been contaminated accidentally. And in 2008, after Beef Products had adjusted ammonia levels in response to complaints about ammonia odors, batches tested positive for salmonella, the very thing the ammonia treatment was supposed to kill.

The article certainly brought up some questions about whether it's wise to add LFTB to ground beef and other food products at all, and the words "pink slime" turned people's stomachs. But is LFTB really as scary as it sounds? 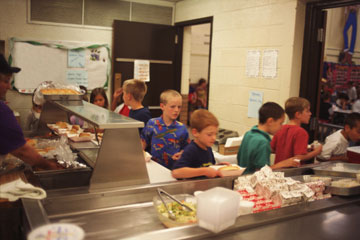 In 2012, the USDA announced that schools could choose between meat with LFTB or without for cafeterias.
PhotoLink/Photdisc/Getty Images

Right now, there are no proven cases of illness as a result of eating LFTB. But that doesn't mean people don't have their doubts about the product.

Part of the squabble is that there's no requirement to mention the presence of LFTB on food labels. Some people, including USDA scientist Gerald Zirnstein, who wrote the original "pink slime" e-mail, and celebrity chef Jamie Oliver, consider selling ground beef with LFTB filler consumer fraud and call for LFTB labeling on packaging. Plus, Zirnstein told The Daily that he thinks the overall protein quality of ground beef is compromised when LFTB is added.

Another rub is that Beef Products representatives made a claim that ground beef with LFBT is safer than ground beef without LFTB. This is simply not true, according to a number of sources. Just because the LFTB is treated doesn't mean it disinfects the meat into which it's mixed. In fact, because LFTB is designed as a filler to expand the supply of ground beef and its presence makes meat more affordable, if a supply of meat were tainted with E. coli or salmonella, then the fact that LFTB had been added to it would mean it would actually reach and potentially harm more consumers, public health lawyer Michelle Simon told ABC News.

Whereas before pink slime was added to ground beef as a cheap filler to save money, its presence has now become a profit and sales headache for companies that sell beef. Supermarkets, fast food chains and other companies are racing each other to announce that products with pink slime are sliding off their shelves -- permanently -- or that they will now only carry ground beef that indicates LFTB on the labeling, a practice recently endorsed by the USDA and by LFTB producers.

The furor against pink slime peaked in early 2012 when the USDA announced the agency would make available to school districts 7 million pounds of ground beef that included LFTB. Oodles of major TV networks and newspapers picked up the story, and it was shared across social media sites, resulting in a petition on Change.org that gathered 200,000 signatures in nine days. In short order, the USDA announced that starting in the fall of 2012 school districts would have a choice of beef with or without LFTB.

The Bottom Line on Pink Slime 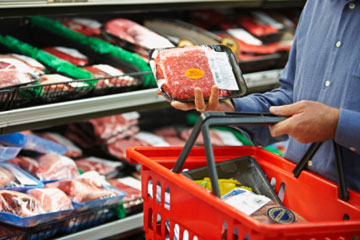 Labels for LFTB will enable consumers to make a choice whether to consume the filler.
Fuse/Thinkstock

In truth, because of how the industry is set up, there's no way to tell for sure if LFTB has ever affected anyone's health. The USDA does not trace food poisoning origins to the processor, sources told ABC News.

And as horrible as pink slime sounds, there are some drawbacks to eliminating its use. Without LFTB, more cattle must be raised and slaughtered to meet the demand for ground beef. And of course cattle are often kept in less-than-desirable conditions, pumped with antibiotics and fed foods not natural to their diets, pointed out Robin Shreeves, writer for Mother Nature Network. Plus, there's the issue of lost jobs. Beef Products, Inc., has now closed three of its four plants, and another LFTB company, AFA Foods Inc., has filed for bankruptcy.

Nevertheless, understandably, people want to know what's in the food they eat, so the USDA endorsement of LFTB-related food labeling is generally viewed as a step in the right direction. The USDA claims its inspectors will certify that ground beef labeled as either "contains Lean Finely Textured Beef" or "LFTB free" is true to those words.

In the meantime, if you're looking for a pink-slime-free meal, check out this list of LFTB-free restaurants and supermarkets: "Where You Can Get 'Pink-Slime'-Free Beef." Otherwise, the best way to make sure you're ordering LFTB-free ground beef at the grocery is to take NPR's advice and have your butcher grind up a slab right in front of your eyes.