by Kathryn Whitbourne Apr 1, 2016
A study showed that people were heavily influenced by the picture on the cake mix box when determining appropriate serving size and calories. Roberto Machado Noa/LightRocket via Getty Images

That creamy frosting draped artistically over the slice of cake on the mix box is not just a "serving suggestion." It can encourage you to take a bigger bite of the caloric treat.

Yep, researchers at Cornell University's Food and Brand Lab discovered that putting a picture of a frosted cake on a cake mix box caused consumers to overestimate the appropriate serving size by as much as 135 percent.

For the study, which was published in the journal Public Health Nutrition, the scientists conducted a series of four tests. In one, they divided 72 college students into three groups: Two groups were given a cake mix box featuring a cake with frosting (one of the first two groups was told that frosting was not included in the box's nutritional labeling). The third group (the control) got the same box except the cake pictured had no frosting. The students were then shown a variety of cake slices and asked to pick which one was an appropriate serving size.

"If we see a slice of cake smothered in frosting on the cake box, we think that is what is normal to serve and eat, but that's not what is reflected in the serving size recommendation on the nutrition label," lead author and researcher John Brand, Ph.D. explains in a press release.

This Betty Crocker mix says it's just 160 calories per slice. But something's missing. The researchers found that the typical slice of Betty Crocker cake was 535 calories, once you included the frosting.
Geri Lavrov/Getty Images

It's been already documented that part of the obesity epidemic in the U.S. is due to increased portion size, and that people are influenced by the serving size depicted on the product box. The Cornell researchers think that a simple way to help combat this would be for manufacturers to add a phrase on the package reminding consumers that extra items, like frosting, are not included in nutritional labeling.

"Undoubtedly, companies don't intend to deceive us when they include frosting in cake box depictions," says study co-author Brian Wansink, Ph.D., director of the Food and Brand Lab in a press release, possibly with his tongue in cheek, "but these seemingly small elements of packaging can have a huge impact."

The researchers also found out, after looking at 51 different cake mix boxes, that on average the calories for the slice of cake and frosting depicted on the box exceeded the calories on the nutritional label by 134 percent. Some brands were much more. For instance, the Duncan Hines nutrition label said a slice of its cake was around 247 calories. However, the actual number of calories for the slice of cake depicted on the box, including the frosting, was more like 762 calories.

Now That's Rich
Depictions of portion size have increased over time not just on food packages but also in paintings. Brian Wansink did another study looking at paintings of the Last Supper from 1000 C.E. to the present. He found that the sizes of the main course, bread and plate depicted had increased by 69 percent, 23 percent and 66 percent respectively over the last millennium. 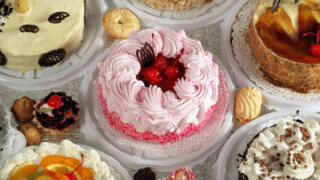 Who made the first cake? 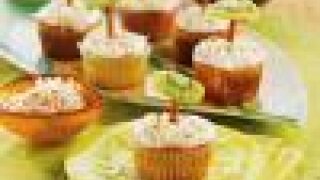 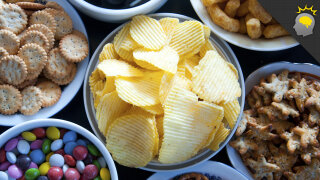 Stuff to Blow Your Mind: Junk Food Overdrive - Science on the Web