What is textured vegetable protein -- and is it good for you? 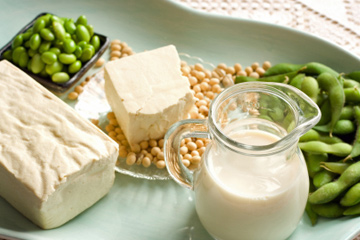 Think of TVP as man-made soy that's full of protein. Learn more about food in these food pyramid pictures.
©iStockphoto.com/diane555

Textured vegetable protein, also known as TVP, is a manufactured soy product. The generic name is Total Soy Protein, or TSP, which is actually a more accurate description since it contains a derivative of soybeans rather than actual vegetables. TVP is a trademarked brand name that has become the frequent identifier.

TVP is frequently used as a meat replacement, or in some cases, a meat extender. It has a texture that resembles ground beef, so it's an ideal meat substitute in spaghetti sauces, chili, tacos and even hamburgers. TVP can also be used as an additive in meat dishes to help a little meat go a long way. It's commonly found in the cafeterias of institutions with limited financial resources, such as schools and prisons.

How TVP is Made

TVP is a factory-made food that originates from a soy protein isolate. The process involves separating the protein from the whole soybean. During this process, a slurry of soybeans is mixed with an alkaline solution that removes the fiber, which is separated from the protein in a large aluminum tank through an acid wash. The final product is a curd, which is then spray-dried at high temperatures. This results in a protein powder, which is put through a high-temperature and high-pressure process in a machine called an extruder. The result is TVP.

Should You Be Eating TVP?

A big consideration in a vegetarian diet is getting enough protein, and soy is beneficial as a complete protein, which means it has all of the essential amino acids your body needs. TVP is a soy protein that is also low in calories, carbohydrates and fat, which is always a bonus. People like cooking with TVP because it doesn't have much of a flavor of its own, so it tends to take on the flavors of the ingredients it's being cooked with, kind of like tofu. But a lot of people think it has a more pleasing texture than tofu, especially if you formerly liked eating meat. That being said, TVP is a highly processed version of soy, and with whole foods and farm-to-table eating being in the limelight, processed foods are getting a big thumbs down these days. Part of the reason food processing is such a no-no is because of the by-products that end up in the final product. Soy isolates have been under the microscope because the process used to make them results in high levels of aluminum (remember the aluminum tank?) in the final product, which is toxic to your kidneys and nervous system. Fortunately, there are whole food soy alternatives like edamame and tempeh that transmit complete proteins more naturally.

Whether or not TVP is for you depends on if you're in the pro-soy camp or the anti-soy camp. Soy came onto the mass market being advertised as the perfect food, and then came a whole lot of controversy about whether soy mimics estrogen and causes cancer, especially in women. Soy-isolate proteins, TVP's mother, came under fire because lab research found that they increased the growth of cancer cells in some animals. But the research of other experts claims that soy as a whole food actually inhibits the growth of cancerous cells, and that the elements of soy that mimic estrogen are much weaker and that they quickly pass through the body within hours. So the general consensus is that soy is safe in moderation, and it's best to stick to whole food soy products.

TVP comes in a freeze dried form that requires reconstitution by adding water -- sort of like astronaut food.

Why is there a gluten-free backlash?
What's All the Buzz About Ezekiel Bread?
Ruby Chocolate: This New Confection Is Pink Perfection