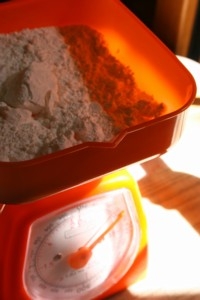 Q. What is the difference between baking soda and baking powder?

A. Baking soda and baking powder are both leavening agents used in baked goods. Their properties are slightly different, so one should not be substituted for another.

Baking soda is an alkali. When it's combined with an acidic ingredient such as buttermilk, honey, or lemon juice, carbon dioxide is produced, which causes dough or batter to rise. You may have noticed that most recipes call for baking soda to be mixed with dry ingredients before stirring in any liquids. This is because baking soda reacts immediately to moisture.

Baking powder is a combination of baking soda; an acid, such as cream of tartar; and a moisture-absorbing agent like cornstarch. Unlike baking soda, baking powder does not need an acidic ingredient to work.

Q. What exactly is baking powder?

There are three types of baking powder: fast-acting, slow-acting, and double-acting. Fast-acting baking powder dissolves rapidly in liquid and begins acting right away.

Slow-acting baking powder uses a different form of acid, such as sodium aluminum sulfate, that doesn't react with the baking soda to produce the carbon dioxide gas until the batter gets hot in the oven. Double-acting contains both the fast-acting and slow-acting acids so that the batter starts rising as it's being mixed, and rises more when it hits the oven.

Q. How do you store baking powder?

A. store it in a dry place at room temperature, away from heat if possible. Don't store it in the refrigerator: Cold causes condensation and shortens its shelf life.

For more information on baking powder and how to use it, check out: