by the Editors of Easy Home Cooking Magazine
NEXT PAGE
Homemade bread is delicious if you know how to make it properly. We'll give you the step-by-step. kumacore/Getty Images

Around the world, bread is the "stuff of life." It's an important part of nearly every cuisine and almost every meal. And nothing beats the satisfaction of serving loaves of your own homemade bread. Making bread for the first time can be a bit scary, no matter how many cooking shows and famous chefs you've watched on television. But preparing your own yeast bread — the familiar white, wheat, rye or multigrain loaves we slice for everything from our favorite French toast recipe to Cuban sandwiches — isn't really difficult. It simply requires a few unique skills beyond those usually called for in other recipes.

So throw out that old bread machine and become a citizen of the bread-making world. First let's start with some bread baking 101.

Yeast-leavened bread makes up much of the bread available in bakeries and supermarkets. These breads contain yeast as a leavening agent. There are two different kinds of yeast breads: yeast-batter breads and yeast-dough breads. Yeast-dough breads are what we think of when think about dough. To make dough, you have to first proof the yeast, knead the dough and let the dough rise. (More about those processes in a bit.)

Quick breads, on the other hand, are leavened with baking powder, baking soda or steam. As their name suggests, they are quick and easy to make. You're probably familiar with quick breads like banana bread, pancakes and muffins. And if you want to really get adventurous, we've included a step-by-step on how to make and braid Challah, the Jewish festival bread that is as lovely for the table as it is delicious for the mouth.

But let's get started with dough. It's where all good breads begin.

How to Make a Sourdough Starter From Scratch 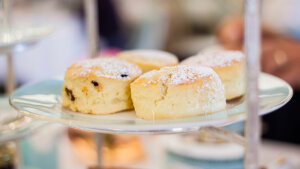