by Stephanie Vermillion May 22, 2020
Butter and shortening are two of the main fats used to make all types of baked goods. But each one has its own pros and cons. VDB Photos/Shutterstock

Your favorite pie crust recipe might call for butter or shortening, but are they really one in the same? Meaning, can you use butter when you're baking biscuits, cookies, pies and other recipes that call for shortening and vice versa?

Technically, yes. You can use them as a one-to-one swap, according to butter brand Land O'Lakes. But should you? Probably not — if you can avoid it. Swapping one for the other could lead to different flavors, textures or appearances — something you may be able to deal with, but it's best to thoroughly understand each fat first.

Butter adds important fat and flavor to recipes it's used in; it contains 80 percent butterfat and about 20 percent water. Shortening, on the other hand, is all fat, no flavor. It's typically made with vegetable oils and used for its ability to help baked goods retain shape while staying soft.

The differences between butter and shortening vary, starting with how they're produced in the first place. Butter comes from an animal, typically cow milk, Castle says. Shortening is more closely related to margarine. It's a form of vegetable oil, often hydrogenated palm and soybean oils, and never comes from an animal. That means shortening technically is vegan.

While butter is yellow, shortening is a soft, powdery white — something Castle says manufacturers used for marketing. "It's snowy, pure and white, which gave the sense of its high quality, safety and purity," she says.

Baking cookies with only shortening will give you a softer, taller cookie in the end, but you'll also lose that rich flavor butter imparts.
Jenner Images/Getty Images

Flavor Is a Key Differentiator

If you opt for shortening instead of butter, expect no added flavor in your recipe. Butter is inherently salty and rich, while shortening is entirely tasteless. That's why people spread butter on their bread, not shortening. It's also why cooks use butter in all sorts of dishes, while shortening is typically used only for baking.

Of course, not all butter is created equally. Salted butter is ideal for spreading on toast or using in pasta. You can use it when you don't need to fully control the amount of salt in a recipe. While it may be less salty, unsalted butter also has a nice taste. It's sweeter, mellower and closer to butter in its purest form. (That said, it does go bad more quickly as salt helps preserve salted butters.)

Shortening is ideal for baked goods that need to hold their shape, such as pie crusts. Since it doesn't melt at room temperature, shortening can keep the final product looking clean and feeling softer for extended periods. "Think of those fabulous cakes at the grocery store; they always use shortening [in the frosting] to hold the shape," Castle says. "Butter would get hot and run. That's why a lot of butter creams are actually shortening creams."

Castle says she often uses shortening when teaching new bakers how to make pie crusts as well. "It doesn't melt in the warm kitchen or with warm hands holding it," she says. "Shortening gives strength to the dough." The difference in a pie crust with shortening versus butter is that the former would be less flavorful than a crust made with butter.

Cookies are another great example of butter versus shortening differences. With only shortening, cookies will retain their shape through cooking. They usually end up standing taller and feeling softer. But they also lose that rich, buttery flavor. That's why most cookies call for butter, even if this leaves them a bit flatter (since butter doesn't retain shape as well). Butter also leaves baked goods with a slightly crispier texture.

Use Butter and Shortening Together

Since butter and shortening bring something different to each recipe, it only makes sense to use them in tandem. "Butter gives you the flavor and color, while shortening gives you strength in dough," Castle says. "I made two dozen biscuits recently, and I wanted them to be thicker, so instead of one stick of butter (eight tablespoons), I used six tablespoons of butter and two tablespoons of shortening." For cookies, a mix of both could result in rich, buttery flavor with a taller, softer final product.

Biscuits are ideal for mixing up shortening and butter. You'll end up with a rich, buttery flavor and a taller, softer biscuit.
rudisill/Getty Images
NOW THAT'S INTERESTING
Yes, shortening is ideal for baking, but it's surprisingly a jack of all trades. Shortening can lube squeaky hinges and locks, shine headlights and even remove gum from your child's (or your own) hair. 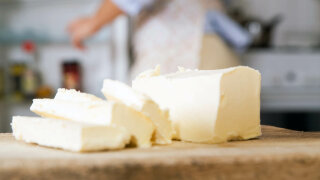 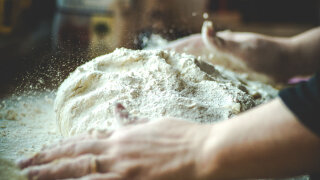 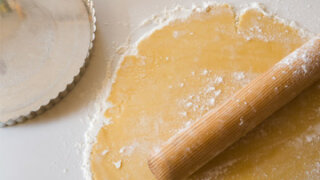 How to Make the Perfect Pie Crust 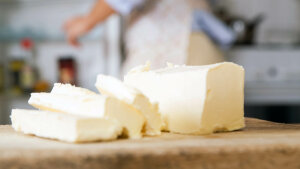 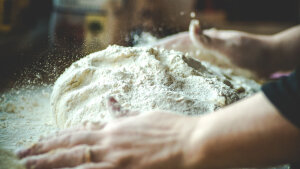