How to Make Dumplings for Your Chinese New Year Celebration 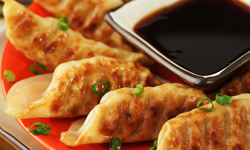 Nicely pleated and well-stuffed Chinese dumplings (Jiaozi or Gow Gees) are flavor-filled pillows worthy of main meal status. They're not hard to prepare, despite how it may look, and dumplings are a Chinese New Year's treat that's a great appetizer or side dish year round.

Because their shape resembles old style silver and gold ingots, making boiled Jiaozi dumplings is a New Year's Eve tradition in Northern China that represents prosperity and success for the coming year. If you'd like to add a new Chinese classic to your culinary repertoire, these filling mouthfuls are a fun and versatile choice.

Also known as pot stickers because they, well, stick to the pot when you fry them, Chinese dumplings can be made a couple of different ways. You can also incorporate a few labor-saving steps into the process if you're in a hurry. Although you get points for forming them perfectly, even if your technique is less than stellar, they'll still taste delicious.

Chinese dumplings can be boiled or fried. Pot stickers, the fried version, sport a distinctive golden brown mark on the bottom where they kiss the skillet. Prep for both methods is similar.

Dumpling recipes are pretty consistent and use a vegetable base, like Chinese (Napa) cabbage, with pork (shrimp, chicken and lamb work, too), cornstarch and spices. Moisture is the enemy here, so dry is good. This means you may have to pat the veggies dry after you wash them.

Preparing dumplings involves four separate steps: making the dough, mincing the filling, forming the dumplings and cooking them in a skillet or pot of water. A couple of these steps can be shortened or completely eliminated if you aren't into the culinary process but still want good, home-cooked results.

Pot stickers make tasty leftovers, so plan on creating a big batch. They also freeze well. Just start them off in a single layer on a cookie sheet, and transfer them to a bag once they're frozen.

Chinese New Year is also called the Chinese Spring Festival. It's based on the lunar calendar and usually occurs between January 21 and February 20 on Western (Gregorian) calendars [source: 101 Lifestyles].

How to Cook for 10 People in 60 Minutes
What's the difference between wet and dry barbecue?
How long should you grill bratwurst?