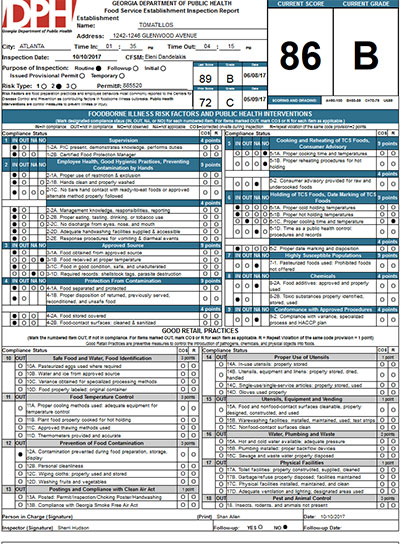 An example of a restaurant rating from the state of Georgia.
Georgia Dept. of Public Health

So what about that fried chicken restaurant with the B rating in the window? Does it mean that you're more likely to get sick from eating a dark meat bucket at this place than if you ate a platter of fried shrimp at the A-rated seafood restaurant down the street? In other words, how much should we really care about restaurant inspection scores?

First, it's important to understand what those letter grades or number scores mean. In general, restaurants are docked a certain amount of points for each violation. And you can find those numbers on the actual inspection report, which most jurisdictions make public. A perfect score is 100. For states and counties that use the letter-grade system, a 90-to-100 point score is an A, 80 to 89 is a B and so forth. Some cities and states require the restaurant to prominently display its most recent grade.

More important than the final score or grade are the specific violations that earned that score. If you really want to know if that chicken joint is safe, you need to look up the inspection report and see if the restaurant committed critical errors that can spread foodborne illnesses, like undercooking food or cross-contamination. Does that mean you'll definitely get sick if you eat there? No, but you can be a more informed consumer.

Second, it's important to understand that restaurant inspections are merely a snapshot of the daily operations of a restaurant. Once or twice a year, inspectors spend a couple of hours inside a business that operates six days a week, 12 hours a day. Since health inspectors are government employees, most of them work daytime hours only, which means they visit most restaurants during lunch shifts, not the dinner rush [source: Hassiotis]. The inspection report may be an accurate representation of what the inspector saw, but it doesn't tell the whole story.

Now there are two ways to think about that snapshot inspection score: as an optimist or as a pessimist. An optimist sees a B rating and thinks, "Well, they caught the kitchen on a bad day and if the violations were really serious, the health department would have shut them down." A pessimist sees that B rating and thinks, "And that's only what the inspector found. Imagine the violations that could happen every other day!"

Ultimately, it's up to the consumer to decide. Inspections are important public services designed to keep restaurant-goers healthy and informed. A low inspection score does not mean that you will get sick, nor does a high score mean that you are guaranteed to be safe. But just be thankful that somebody out there has your back.

I'm not one of those people who pays attention to restaurant inspection scores. I'm much more interested in what's on the menu — and what restaurant critics and public reviewers say about the food — than what's posted in the front window. That said, if you're really curious about how much the management cares about food safety, I think the state of the bathroom speaks volumes. If the boss cares enough to clean the bathroom every hour, that displays a certain attention to detail that likely crosses over into the kitchen. If the bathroom is nasty, who knows what else might be "crossing over" into the kitchen ...