Why does salt prevent food from spoiling? 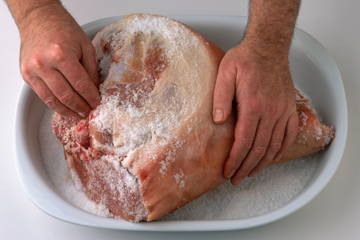 How does salt preserve food? By stopping bacteria in its tracks through tricks like dehydration.
Ian O'Leary/Getty Images

You might toss a little over your left shoulder for good luck, sprinkle some on your eggs or even tip a shaker into a frothy beer. However you use it, one thing's for certain: Most of us take salt for granted.

Salt wasn't always such a simple matter. For centuries, it was a rare commodity used as payment, as an impetus for wars and, often, for survival. Salt preserved fish in ancient Egypt, seasoned Roman salad dressings and even measured a person's integrity, hence the saying "worth his salt." It kept entire civilizations alive thanks to its ability to prevent foods from turning into bacteria-laden killers.

To understand how salt prevents food from spoiling, it's important to first grasp how it's used to preserve foods. Salt is used in two primary ways to preserve foods, either in granule form or in brine, which is a salt-and-water solution. A ham, for example, might be cured with salt, and cucumbers are preserved (and turned into pickles) with brine. Curing with salt granules, known as dry curing, means applying salt to the outside of a cut of meat and storing it for several weeks. It's one of the most ancient ways of curing meats. Modern curing can involve injecting meat with salt brine.

Whatever the form of salt that's used, the mineral not only preserves foods but also prevents bacteria from growing, including foodborne pathogens such as salmonella, which can cause food poisoning, typhoid fever and other serious problems.

Salt inhibits bacteria in a variety of ways. It's a disrupter that wreaks havoc in microbes, interrupting their enzymes and chipping away at their DNA. It most often works through dehydration, removing many of the water molecules that bacteria need to live and grow. Water molecules in food are measured in terms of product water activity, a number that signifies the free water molecules present. Before salt preservation, many fresh foods have 0.99 product water activity. The product water activity is lowered when salt dehydrates the food through the process of osmosis. In essence, the salt around the outside of the food draws water molecules out and replaces them with salt molecules until the amount of salt is equal inside and out. Lowering the water product activity to 0.91 is sufficient to prevent most bacterial growth; for some foods, the number might be 0.94 [source: Parish].