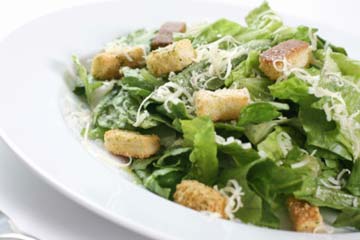 For whatever reason, the world of food firsts is hotly contested turf. So much so that you if you feel the impulse, you might actually want to just stop reading this article, head directly to your kitchen, whip up something novel and start feeding it to everyone you know in the hope you can start a foodie revolution. If you get the credit for a divinely innovative creation, your name will be hailed for generations.

That being said (and if you haven't already left to search for new killer ingredient combos), let's talk Caesar salad. Caesar salad was reportedly invented by a man named Caesar Cardini in 1924. The widely touted story goes a little something like this: Cardini, who owned the restaurant Tijuana, was running low on supplies when some hungry friends happened by. Not wanting them to starve, he threw together a few ingredients he still had on hand. Among them were romaine lettuce, garlic, croutons, Parmesan cheese, olive oil, eggs and Worcestershire sauce.

His patrons were reportedly more than satisfied with the mix, and word spread of this agreeable new leafy delight. A salad sensation was born. Sadly, however, while the Caesar salad remains a classic dish to this day, the restaurant that spawned the creation has since shut its doors (at least for the time being).

Of course, some mysteries and Caesar salad conspiracy theories still abound. Was the Caesar salad really the brainchild of some long-forgotten anonymous cook slaving away back in the kitchen? Did the anchovies -- now often a Caesar staple -- only get slipped in by Cardini's brother Alex? And how much are you craving a Caesar salad right now? For more answers to all your food-related queries, click on the links on the next page.