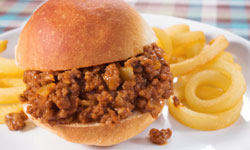 You can't get much messier -- or more American -- than a big sloppy joe. See more pictures of healthy soups and sandwiches.
iStockphoto/Thinkstock

What we now widely recognize as a sandwich is thought to have originated in England during the 18th century. Colonial Americans weren't too fond of imitating anything British, so it wasn't until well after the Revolutionary War that new settlers started using this term to describe bread and meat combinations. Our country's founding generations brought customs and cuisine to all corners of the United States, just as new immigrants continue to do today. American fare tastes different depending on the region you live in, and as it turns out, so do sandwiches. Here are 10 of America's most beloved sandwiches -- and a few of our variations on the classics.