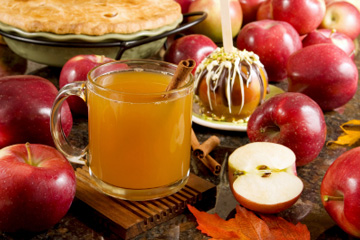 Keep yourself warm with this winter staple. See more pictures of apples.
©iStockphoto.com/og-vision

Cider is the signature beverage of autumn. It wards off the evening chill, and cider preparation has historically taken advantage of all those windfall apples that drop from the trees before harvest time. What better way to keep the doctor away, especially when the days get shorter and the nights longer, than with a warm mug of cider?

What's the Difference Between Cider and Juice?

If you're into apples, both apple juice and cider are probably on your list of favorite beverages. One problem when you travel to different areas in the United States, though, is that the definition of cider varies from region to region. There's some crossover between apple cider and apple juice, and on the strictly cider side, some folks expect their mug-full to be alcoholic and others don't. For the sake of clarity, let's take a look at some of the characteristics of cider:

Although drinking cider is usually safe, there are some potential dangers of cider that hasn't been pasteurized, a process that kills harmful microorganisms with sustained heat.

Cider made from windfall apples is an autumn tradition, but fallen apples may harbor bacteria that can easily contaminate a batch of cider that will otherwise look and taste fine. This can happen when windfall apples come in contact with contaminated water from grazing cattle or other animals. Contamination with Salmonella or E. coli is always a possibility with unpasteurized cider, and children, the elderly and pregnant women are particularly at risk. To be safe, make sure that the cider you're drinking has been pasteurized, particularly if you're visiting a family farm or local farmer's market [source: USDA].

With a little judicious label reading, a cinnamon stick and a roaring fire, you'll be getting your apple a day the easy way. Even if you don't feel like drinking cider, try using it instead of water in sauces, marinades and baked goods. You'll be adding the flavor of fall to your dishes without the mess. What could be simpler than that?